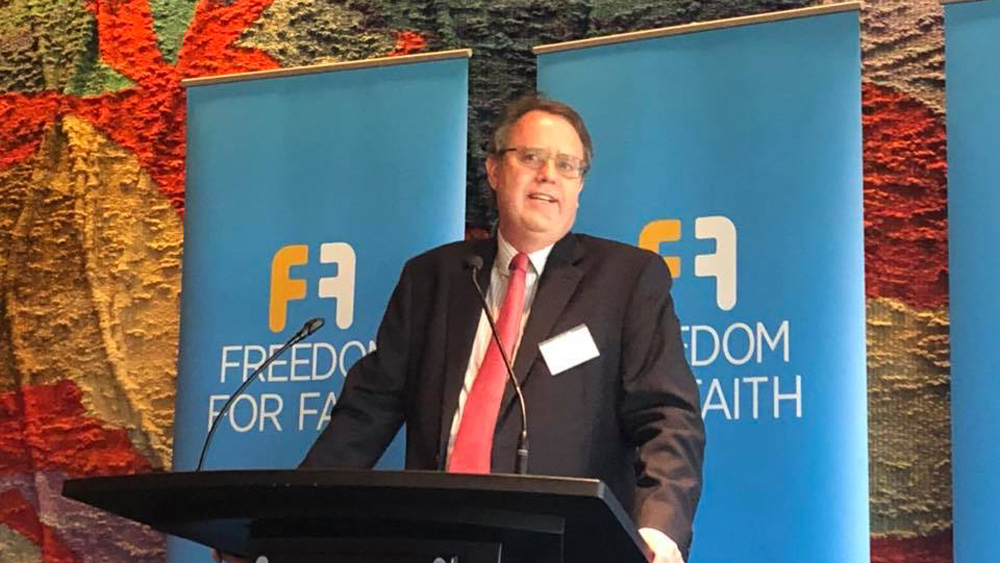 Discussions at senior levels in the Federal government on religious freedom have begun, after the Phillip Ruddock-led Expert Panel inquiring into the subject handed it’s report to the Prime Minister last week.

“Will we get all that we would like? No.” – Patrick Parkinson

“It is a glass half-full situation. Will we get all that we would like? No.”

The FFF conference was intriguingly titled “The Limits of Religious Freedom.” The FFF booklet carried the logos of the Anglican Diocese of Sydney, Australian Baptist Ministries, Australian Christian Churches, the Presbyterian Church of Australia, The Seventh Day Adventist Church and the Barnabas Fund which seeks to protect Christians. The group also is close to the conservatives within the Catholic Church.

Parkinson wrote the FFF submission to the Ruddock Inquiry, which was one of the more significant materials placed before the Expert Panel. Eternity understands that it was well received. Parkinson takes up a new position as Academic Dean and Head of School for the University of Queensland Law School in July.

His address to FFF focused on “The Limits on the Freedom of Religious Organisations to select staff consistent with their ethos.”

He began by tracing the birth of Christian welfare organisations to God’s “bias to the poor”, picking up on the title of a book by David Shepherd (one time Bishop of Liverpool and a former captain of the English cricket team). “It is all the way through Scripture: look at the laws about the Jubilee, look at the book of Ruth. Look at the rule she relied on to feed her and her mother, the rule to leave the corners of the field unharvested.”

He contrasted that to our Western political systems, which are dominated by the top ten per cent of the population – the top 0.1 per cent with wealth and the 9.9 per cent who dominate the universities and the media. “The You and Me,” he told his audience in the Strangers Meeting Room of the NSW Parliament.

“This is a distinction that gets lost in the whole debate.” – Patrick Parkinson

“The question is, if the government delegates delivery of welfare services to FBOs, to what extent should those organisations be able to discriminate in the hiring of their staff to maintain their ethos?”

Parkinson answered that question by suggesting a FBO should, at least, be able to maintain the faith of the top echelon – to maintain a positive selection of their top staff.

He added: “To a large extent, large-scale industrial organisations have lost their Christian ethos.”

“But it is different in education.”

Parkinson drew a crucial distinction between religious and independent schools (funded by Government in order to provide parental choice), and the delegation of welfare services by government for reasons of flexibility, separating provision of services from monitoring their quality and possible efficiencies.

“This is a distinction that gets lost in the whole debate. We have two different sets of organisations that are government funded for two different purposes.”

“We are being listened to by both sides of politics.” – Patrick Parkinson

At this point, Shakespeare made a brief appearance, as Parkinson explained two terms often used about religious freedom and staff selection.

“‘A genuine occupational requirement’ might be, for example, women playing women in a film. But it is not an ‘inherent’ requirement, in that in Shakespeare’s time, female roles were played by young males.”

He gave an example very close to home. “This argument is often played out with Christian schools. We often hear that people say they accept that a principal should be Christian but what about a maths teacher or a gardener? It is hard for a secular mindset to see why you need a Christian maths teacher. My wife is a maths teacher and she brings God into her classroom all the time, saying that an equation relates to the order of creation.”

The Parkinson speech to FFF is significant for two reasons. It constitutes a certain amount of “expectation management” of the Christians within the FFF umbrella. Secondly, it possibly echoes the conversations going on in Canberra about religious freedom.

“We are being listened to by both sides of politics,” he told the FFF audience.

Despite the Ruddock Inquiry being Federal, most laws touching on religious freedom are state based. A significantly different approach to Parkinson’s is being taken by the Christian Democrat Party who have tabled a new Religious Freedoms bill in the NSW Parliament.

The bill aims to “amend the law prohibiting discrimination in New South Wales so that the religious beliefs and religious activities of individuals and certain bodies are protected.”

Discrimination on the basis of religious belief or activities would be banned in:

Faith-based organisations would be protected from detrimental treatment by public officials.

A wide ranging provision would ensure that anti-discrimination law would not affect “the appointment of any person to or within a faith-based institution, where the appointment conforms with that institution’s religious objectives and the religious interests of its members.”

It’s not just a cynical excise. The Ruddock Review could make a difference

Next steps for religion laws

Next steps for religion laws