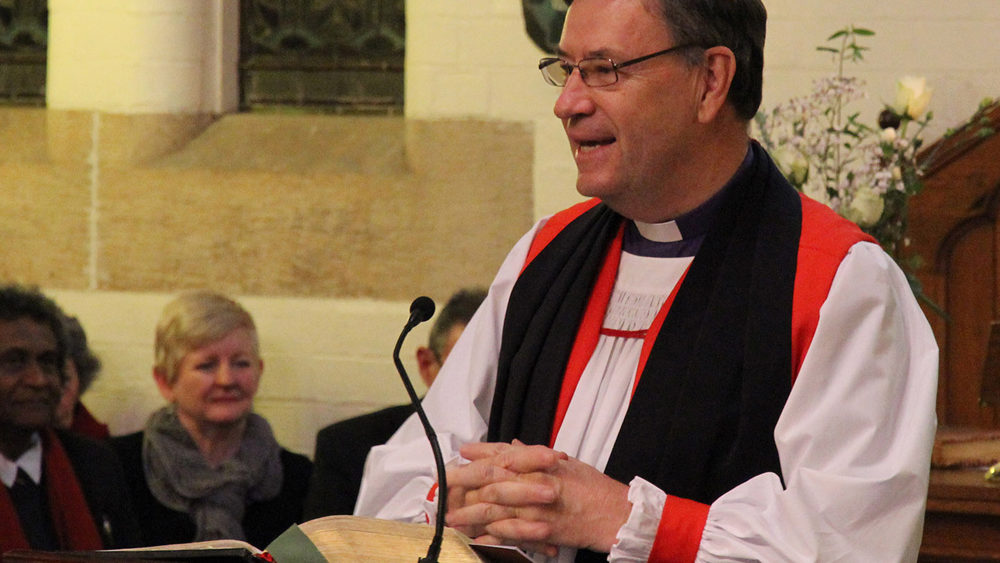 Glenn Davies, Anglican Archbishop of Sydney, has a message for people who disagree with him, and his diocese, about same sex blessings – they should leave the church rather than fight.

“My own view is that if people wish to change the doctrine of our Church, they should start a new church or join a church more aligned to their views – but do not ruin the Anglican Church by abandoning the plain teaching of Scripture,” he told his Synod (church parliament) in his final address to them.

“Please leave us. We have far too much work to do in evangelising Australia to be distracted by the constant pressure to change our doctrine in order to satisfy the lusts and pleasures of the world.”

Davies’ theme was ‘guarding the faith’ and he commended two new bishops in his address – Mark Calder, a minister from Noosa who will become the next bishop of Bathurst. Calder will be supported financially by Sydney diocese (region) as the country diocese is in a financial drought after spending on schools plunged it into debt. Davies described Calder as an able minister who has grown parishes in both Roseville in Sydney and the Sunshine Coast in Queensland.

Davies said he was delighted to welcome Jay Behan from Christchurch, New Zealand, who will become the first bishop of the Church of Confessing Anglicans of Aotearoa New Zealand. It is made up of 12 churches formed by people who have left the existing Anglican Church in New Zealand and Polynesia after it allowed bishops to authorise blessings of same-sex marriages.

“It is therefore our privilege and delight to offer Bishop-elect Behan the right hand of fellowship this afternoon and to recognise him and his diocese as authentically Anglican,” Davies said.

Behan was invited to the front of the large auditorium where the 800-strong synod meets to have hands laid on him by the Sydney delegates who will travel to New Zealand on Saturday for his installation as bishop. That ceremony will include several Sydney bishops such as Davies, Peter Jensen, Paul Barnett and Moore College Principal Mark Thompson, with leaders of GAFCON the worldwide network of conservative Anglicans.

“Friends, we have entered dangerous waters,” Davies said, speaking of moves towards same-sex blessings in the Wangaratta and Newcastle dioceses. “I fear for the stability of the Anglican Church of Australia. These developments have the potential to fracture our fellowship and impair our communion.”

He stated that it was time the Anglican Church made a decision on the issue.

This will be Davies’ last synod as Archbishop. He announced his decision to stand down earlier than planned to allow an election synod to take place in August next year. He made it clear that he hopes the election of his successor as archbishop will be a great deal calmer than his own.

“Seven years ago, our diocese was polarised by the early announcement of two nominees for the office of Archbishop. This proved to be an unhealthy aspect of our diocesan life, regrettably fuelled by many unrestrained comments on social media. I believe we have matured as a diocese and especially as a synod through that experience. I do not detect the kind of angst that was apparent during the lead-up to the next election, nor the similar expressions of anxiety and factional friction that the two previous elections exhibited. Rather, I do detect a growth in our love for one another.”

Please let us know what you think of Davies’ address

Tanya Davies, the strong anti-abortion campaigner in the NSW Parliament has told the premier Gladys…

No common cup, no kissing, no handshakes

John Davis and Rob Whalley, both ministers in the Anglican Church, got married this week…

Pan-Amazon Synod ends with focus on Indigenous Peoples, the poor and creation care

The new Religion Discrimination law has been passed – not in the Federal Parliament, but…