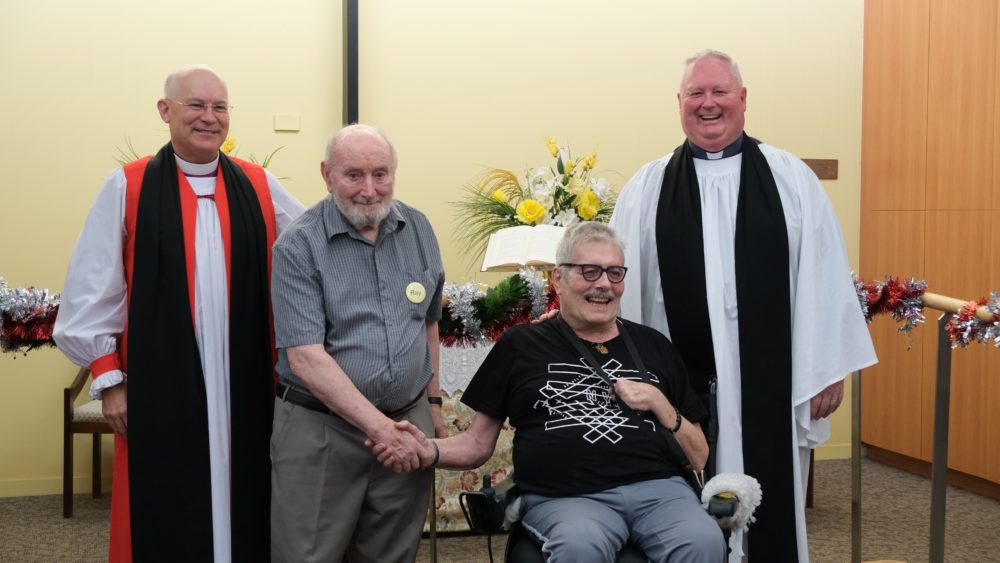 Friends Ray Turner, 82, and Chris Lawes, 75, were very proud of each other when they publicly declared their faith in Jesus recently.

This heartfelt proclamation was at a confirmation service conducted by the Anglican Bishop of North Sydney, Chris Edwards, held at an Anglicare residential care facility in Sydney.

“All the things I saw killed my faith … I just couldn’t relate to God letting those things happen.” – Ray Turner

In front of about 50 people at Farrer Brown Court, Ray and Chris’ confirmation was an emotional occasion, not only for them but also their families.

Ray only became a Christian recently. He came to Farrer Brown Court six months ago with a lot of questions about Christianity. He believed in the historical Jesus, but he did not believe in Christ’s resurrection or the afterlife.

The former printer from Tipton in the English Midlands says he lost his childhood faith as an 18-year-old soldier when he was posted to Hong Kong for two years on national service.

While there, he witnessed riots and other traumatic sights such as a baby being dropped from a balcony and left lying in a gutter dead for three days. He also saw a taxi being burned with the driver inside it.

“I started to see things from a different perspective,” Ray tells Eternity. “All the things I saw killed my faith.

“I just saw no hope at all. There was just this life and we’d made a mess of it. And I just couldn’t relate to God letting those things happen.”

Ray Turner, right, is prayed for by Bishop Chris Edwards.

Ray, whose son and daughters have been praying for him for years, says he still lived his life as a Christian – but without actually believing in it. That was until a few months ago when he caught himself in a discussion with a resident at Farrer Brown Court and arguing that there was a God.

“And I thought, ‘This is ridiculous – how can I say I don’t believe when I’m arguing for it?’ That was quite a good moment.”

“I’ve become one of your guys.” – Ray Turner

Ray then did a Christianity Explored course with chaplain Marty Symons, seeking to understand questions such as what happens when we die.

While those sessions were helpful, he only invited Jesus into his life when he heard a sermon on John 14:2 – “My Father’s house has many rooms; if that were not so, would I have told you that I am going there to prepare a place for you?”

“Things just fell into place. It just seemed to gel,” says Ray. Soon afterwards, he went up to Marty and said, “I’ve become one of your guys.”

Since then, according to Ray, Jesus has given him peace. 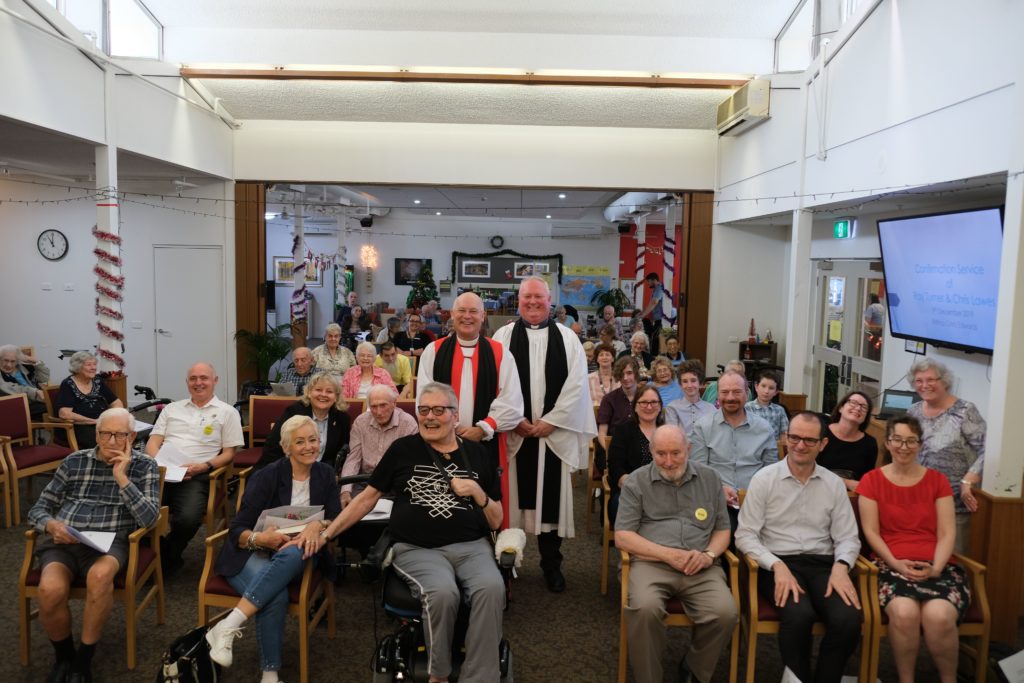 “I’ve found relief. When I came here, I was meant to come for two weeks respite.

“I feel quite happy about all the way things are going now and I’m just looking for work!

“I need something to be active. And I still beat these lot at golf!”

Fellow resident Chris, 75, has also experienced a spiritual transformation since he started studying the Bible with Marty. Chris, who is in a wheelchair, may be failing in body but his faith is growing stronger by the day.

Another migrant from England, Chris grew up in a Christian family in Hayes, Middlesex. About 20 years ago, he went on an extended holiday through Europe.

“I became the most firm believer you could ever ask for.” – Chris Lawes

On his way home, Chris got off the plane at Bangkok to stretch his legs.

“I collapsed and I had a stroke,” Chris explains to Eternity. “I ended up in Bangkok Hospital. Eventually they put me on a plane and a doctor came back with me to Australia and when I got back, I had to learn to walk again and to talk.”

This was when some good friends invited him to church and he happily went along to Hillsong Church.

“I went there for several months and one day the preacher’s name was Phil Dooley [from Hillsong in Cape Town]. He was preaching and, all of a sudden, it all made sense to me.

“I became the most firm believer you could ever ask for.” 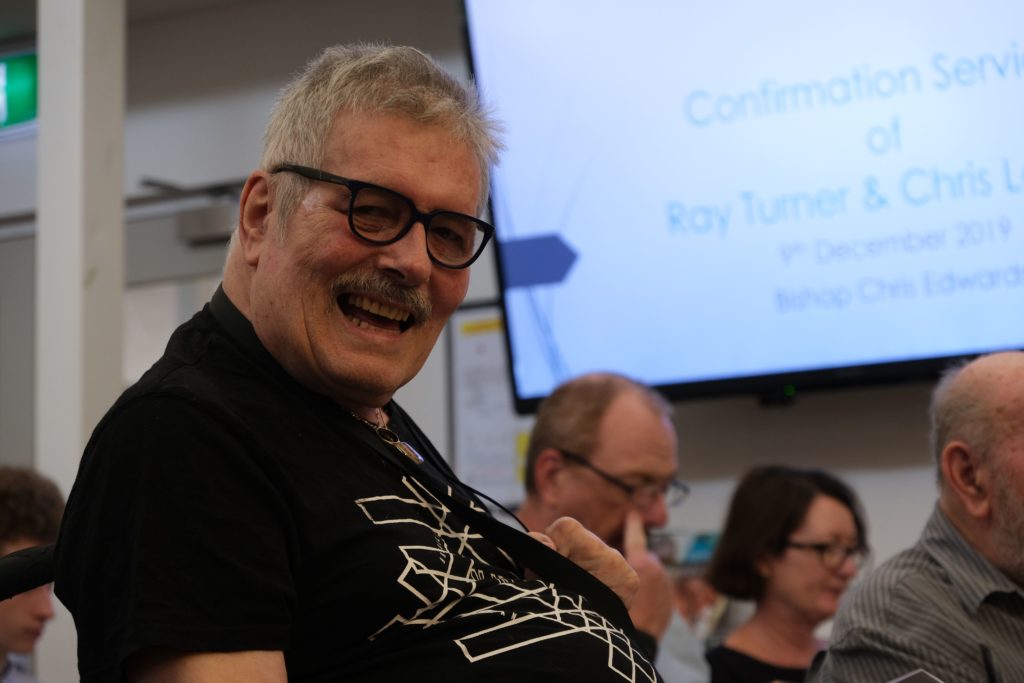 Unfortunately, his disability became too much for his wife Stella to handle on her own, and Chris moved into Farrer Brown Court.

“When I first arrived here there was no chaplain at all,” remembers Chris.

“We were without a chaplain for two or three years and we felt like lost sheep without a shepherd. And then all of a sudden along came this fella, Marty Symons. We shook hands and he said, ‘There’s church every Sunday’ and I religiously went to church every Sunday – and I joined the Bible study, which was the best thing I’ve ever done.

“I seriously believe that one day I will go to heaven.” – Chris Lawes

“Marty’s knowledge of the Bible is astronomic and he managed to fill in the tiny gaps that were there. It all made so much sense that there is a God and there is Jesus and, if we’re following in Jesus’ footsteps when we eventually fall off our perch, we know where we’re going to go.

“I have the key to heaven and I seriously believe that one day I will go to heaven and see my mother again because I know she was a strong believer.”

Chris says he soon got to the point where he wanted to declare his faith in Jesus in front of everybody at a confirmation service.

“It was an awesome day. And now my belief is so strong … I want so desperately to help other people who haven’t yet found the Lord.”

“You’ve got so much faith inside your body that nothing, absolutely nothing scares you.”

Thinking about the afterlife, he adds: “I’ll be a spiritual body then, I won’t need glasses, I’ll throw those away, my hearing aid will be thrown away and I won’t need it.

“My body will be perfect for an eternity. It gives such a strong feeling inside that you know where you’re going and what you’re doing – and what little time you have left on this earth to try and help those who haven’t yet had the benefit of finding the Lord. That’s what I have to do.”

Marty says he has seen a big change in Chris over the past three years, as his passion for Jesus has grown.

“Chris doesn’t miss a Sunday, he doesn’t miss Bible study, he’s there every week and he goes around and talks to people about Jesus all the time.”

“He wasn’t doing that when I first arrived, so I’ve seen him grow over a period of time and it’s been fantastic. And I’m looking forward to the future seeing how God’s going to use him in Farrer Brown – because he’s still a young bloke, comparatively, at 75.

Chris shares similar excitement about the growing faith of his good mate. “With Ray, it’s been wonderful seeing all the lightbulb moments that just come on, from struggling with the resurrection of Jesus to believing in that and seeing the hope that he has through Christ,” says Chris.

Marty concludes: “It’s never too late to ask Jesus into your life. No matter what you think you’ve done or the guilt you carry, there is nothing that Jesus’ blood cannot wash clean.”

Christians hear God’s voice in many different ways. Tania Harris wants to show you how she hears it.

‘STOP IT!’ Don’t hoard: Leave enough food for those in need

‘STOP IT!’ Don’t hoard: Leave enough food for those in need