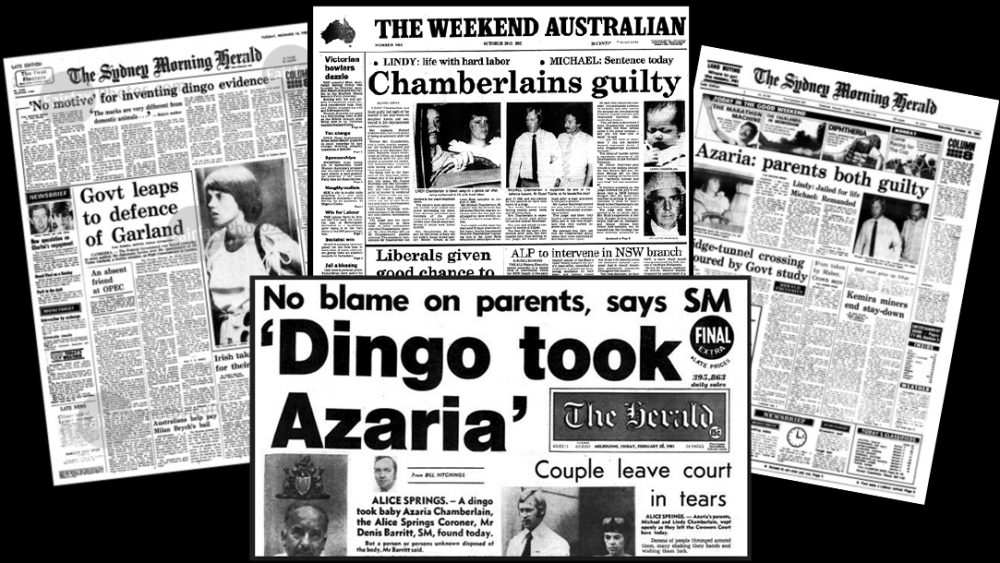 Michael Chamberlain kept his faith despite loss and public shame

Malcolm Brown is a former reporter with the Sydney Morning Herald. From 1980 to 2012, he covered the high-profile case of the Northern Territory disappearance of baby Azaria Chamberlain. One of the most notorious criminal cases in Australia, Azaria’s disappearance came to focus upon her mother Lindy and father Michael.

On January 12, Michael Chamberlain died due to issues related to leukaemia. Across three decades of covering the Chamberlain case, Malcolm Brown came to know Michael and he was was asked to speak at a Memorial Service for him, held at the Avondale College Church in Cooranbong on the NSW central coast on Monday, January 16. He gave Eternity permission to publish what he shared:

Michael, sadly, had died at Gosford on January 12, from a blood disorder which appears to have come on him quickly. I wrote the first news story and an obituary, but was surprised by the huge public response and what appeared to be a genuine outpouring of grief. Supporters came from everywhere, including John Bryson, whose book, Evil Angels, had made a significant contribution to changing public perceptions on the case; Norm Young, whose book, Innocence Regained, had told the story of the Chamberlains’ fight for justice; and Professor Ray Watterson, from Newcastle University, who had sponsored Michael in his academic career. Stuart Tipple, the Chamberlains’ long-suffering lawyer, was there, and Andrew Kirkham QC, who had helped defend the Chamberlains. Lindy Chamberlain-Creighton and her husband came, as did Michael’s wife Ingrid, and children from all the families.

But Michael stayed at the helm, never succumbing to depression, never consumed by bitterness

I had not written out what I was going to say at the Memorial Service. It had simply taken a copy of Rudyard Kipling’s poem If, and spoken from the top of the head. I said Michael had been knocked down so many times, and each time had got up and started again – and that was what Kipling’s “Man” had done. Kipling’s If was one of the great moral lessons my father had taught me, that the most courageous and worthy man is not someone who automatically comes out swinging and seeks vengeance, but the one who quietly surveys the scene and, using whatever resources are left, carries on.

Michael did that for the entire 36 years of his life which were to elapse from that dreadful night at Ayers Rock in August, 1980, when he lost his baby daughter.

In my address, I went through the poem:

If you can keep your head when all about you

Are losing theirs and blaming it on you,

If you can trust yourself when all men doubt you,

But make allowance for their doubting too

What did Michael do in the aftermath of Azaria’s disappearance? He kept his head. Even before the first coroner’s inquest began in December 1980 – and, officially, the tide was well in the Chamberlains’ favour – and coroner Denis Barritt found a dingo had taken the baby, there were dark mumblings. Michael quickly realised there was ill-feeling towards himself and Lindy. But he trusted himself and the justice system, which he assumed would come to the right conclusions as to what had happened.

When police raided the Chamberlains’ home and those of primary witnesses in September, 1981, and the inquiry reopened in a blaze of publicity, that confidence was shaken. It continued to be shaken through the second inquest, and in the trial in 1982 which saw Lindy convicted of murder and Michael for being an accessory after the fact.

From the time the first inquest finding was quashed, Michael had to wait 31 years for it to be reinstated. His wife did three years in gaol; Michael’s career as a Christian minister was destroyed, as was his marriage; and, all the time, he was pariah in the eyes of so many.

He felt that however impossible things appeared, God would ultimately be with them.

But Michael stayed at the helm, never succumbing to depression, never consumed by bitterness, never becoming neurotic or taking to drink. When the High Court dismissed his and Lindy’s appeals against their convictions in 1984, Michael felt it appropriate to step down from the Seventh-day Adventist ministry.

But he never lost his faith and, along with Lindy, he felt that however impossible things appeared, God would ultimately be with them. In many ways, his attitude towards those who despised him was: “God forgive them, for they know not what they do”

If you can wait and not be tired by waiting,

Or being lied about, don’t deal in lies,

Or being hated, don’t give way to hating,

And yet don’t look too good, nor talk too wise

In the second stanza, Kipling went on to say:

If you can bear to hear the truth you’ve spoken

Twisted by knaves to make a trap for fools

Michael had always told the truth, as had Lindy. They had stated exactly what they knew and remembered. But everything was turned around, by ill-meaning members of the public, by police, lawyers, bureaucrats. A sinister meaning was attributed to much of what they said and did. The only time it worked in their favour was when a matinee jacket Lindy said Azaria had worn was found. Upon that discovery in February 1986, as it indicated Lindy had been telling the truth about at least that all along, the Northern Territory Government caved in. It released Lindy and ordered an inquiry. Even though that was the first step towards exoneration, it was, in a sense, only a pyrrhic victory. But Michael had proved his resilience.

Kipling said if you:

watch the things you gave your life to, broken,

And stoop and build ’em up with worn-out tools…

Michael Chamberlain had another serious misfortune when his second wife, Ingrid, suffered a debilitating stroke in 2011. This obliged him then to become a full-time carer. But he did that without complaint, and turned the knowledge he gained from that – about stroke victims and carers – into a new subject for his academic research with the University of Newcastle. One might have wondered how Michael was able to continue. But he did.

If you can force your heart and nerve and sinew

To serve your turn long after they are gone,

And so hold on when there is nothing in you

Except the Will which says to them: ‘Hold on!’

If a man were to do all that, Kipling concluded: “you’ll be a Man, my son!”

The fact that Michael Chamberlain did all that, stayed at the helm long after people had written him off, never lost his faith or his determination, was an example to everyone. He indeed emerged as a Man among Men, and, I suggest, might have made a contribution to changing Australia’s culture.

Malcolm Brown is a former reporter with the Sydney Morning Herald. He covered the Chamberlain case from 1980 till 2012. He worships at St Philip’s Anglican Church, Eastwood, New South Wales.