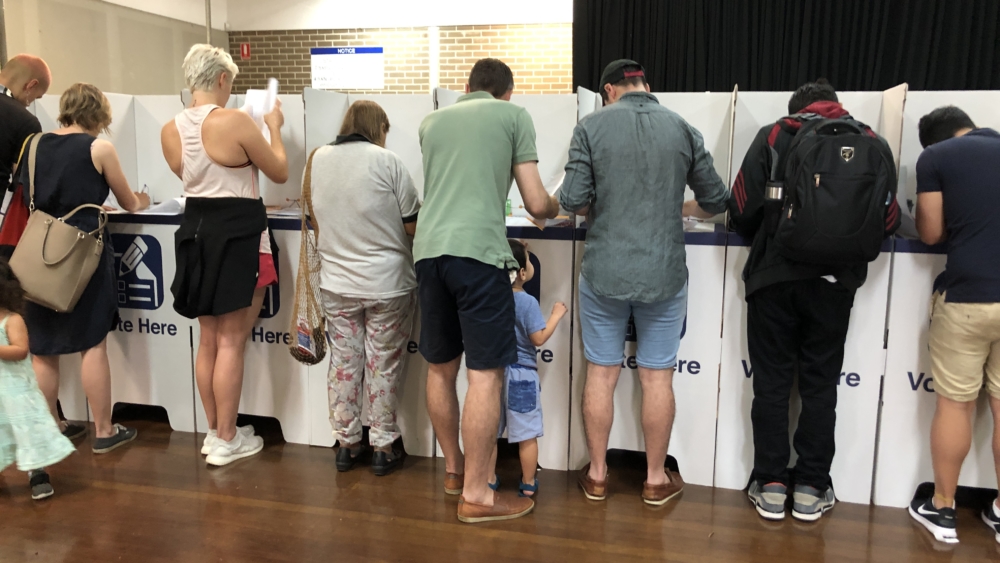 I’m all for Christians taking leadership in political life. And we should pray, and pray often, for our Prime Minister. But I am troubled by Scott Morrison’s decision to invite cameras into a worship service at Easter, in the middle of an election campaign.

Eternity recently published my concerns in an article about the Prime Minister’s Easter Sunday camera call.

I’m thrilled that our Prime Minister and the Leader of the Opposition go to church at Easter, and that they speak openly about their faith. But what should really matter to Christians this election is the stance our politicians take on key issues. I believe these are issues that the gospel, the Bible, and Christ’s words and life have much to say about. And a Prime Minister who professes to be a disciple of Jesus should seek policies that line up with the life and message of Jesus.

Christians in politics must address the following issues with courage, compassion, love and justice. If a politician professes to be a disciple of Jesus, as Scott Morrison does, then that politician must follow in the way of their Lord (whether or not it wins votes).

That may sound politically naive, or like a recipe for political loss — but that’s discipleship to Jesus. Disciples go where their Lord leads. He leads and they run after him! They count the cost, burn their boats, and follow Jesus. Disciples run after Jesus, regardless of the price to their chosen profession (politician or otherwise).

So here’s what I think all Australian Christians should really care about: our Prime Minister’s stance on these following issues.

Does the Prime Minister’s stance on them line up with the gospel? Does he express the compassion, love, mercy, and justice of Jesus Christ?

A politician who is a disciple of Jesus will do all they possibly can within their office to:

My list is extensive – although I could have added more. But I like Andrew Hamilton’s reflection on how to choose the right party to vote for: ‘I have always sought to align with those who best depict the kingdom of God (as I see it). I reckon that is all we can do and then choose to respect one another’s differences.’

I’m much more interested in a political party’s stance on such matters – and whether a Christian politician is providing leadership that reflects gospel convictions – than whether they get filmed going to church at Easter.

Let’s pray for our Prime Minister and our current political leaders. Let’s pray for God’s Spirit to move across our nation and bring the healing only Christ and his gospel can bring.

And let’s get more informed about politics and how it works. Let’s closely scrutinise the policies of all political leaders and parties. Let’s ask how closely they align with the gospel and words of Jesus Christ. Let’s expect all politicians who profess to be Christians to support policies that line up with the mercy, justice, compassion, and gospel of Jesus Christ our Lord.

One other thing … ALL Christian life is political. We are too tempted to outsource our political life to politicians.

So, what are the “political” practices of the people of Christ? Here are some:

* Be peacemakers.
* Seek justice.
* Reject greed and selfish ambition.
* Love enemies.
* Seek reconciliation.
* Embrace the stranger and the “other”.
* Proclaim the gospel.
* Worship in spirit and in truth.
* Break bread and baptise believers.
* Practice forgiveness.
* Care for the poor, homeless, displaced, asylum seeker, and refugee.
* Act for justice and mercy, wherever we see injustice, exploitation, or corruption.
* Announce the kingdom and gospel of Christ, in word, sign and deed.
* Advocate for Aboriginal and Torres Strait Islander rights and claims.
* Partner with Aboriginal and Torres Strait Islander peoples for justice and truth and recognition.
* Care for the orphan, the widow, and those in need.
* Let go of power and control.
* Serve others, and especially those the world shuns or neglects.
* Be generous and content—not greedy and selfishly ambitious.
* Replace ego and pride with humility.
* Practice church discipline, and gathered spiritual discernment.
* Eat together, and eat with neighbours and strangers.
* Open our homes, our lives, our lands, our families, and our churches, to strangers and “foreigners” and “others”.
* Give without expecting anything in return.
* Bless our neighbours and build healthy, thriving neighbourhoods.
* Plant trees and gardens, and care for the earth.
* Build welcoming and open homes and families.
* Seek the well-being of our cities, suburbs, rural areas, and neighbours.
* Transcend social and cultural barriers.
* Release the whole body of Christ to mission and ministry.
* Advocate for the poor and powerless.
* Care for those suffering from the drought.
* Speak up for all persecuted minorities and religious groups.
* Pray without ceasing.
* Build genuine community.
* Address gambling, pornography, and addiction.
* Address issues to do with abortion and the sacredness of life.
* Examine our associations with power and privilege.
* Show an active concern for the poor, silenced, marginalised, vulnerable, forgotten and oppressed.
* Ask, “Who is my neighbour?” and responding courageously to the answer.
* Do justice, love mercy, and walk humbly with God.
* Examine how greed and ambition have shaped our lives, and seek to change.
* Bless those who persecute us.
* Seek justice and righteousness and holiness; but above all, put on Christ’s love.

These are all profoundly political practices. They change lives and nations. They point to King Jesus and his coming kingdom.

It’s time for the Australian church to rise up and truly be the church. We are Christ’s body, “the fullness of him who fills everything in every way” (Ephesians 1:23).

Graham Hill is the Founding Director of The Global Church Project and in July he begins a role as Research Coordinator at Stirling Theological College (University of Divinity) in Melbourne, Australia.

ScoMo on show on Easter Sunday

J-Mo opens up her faith and family life