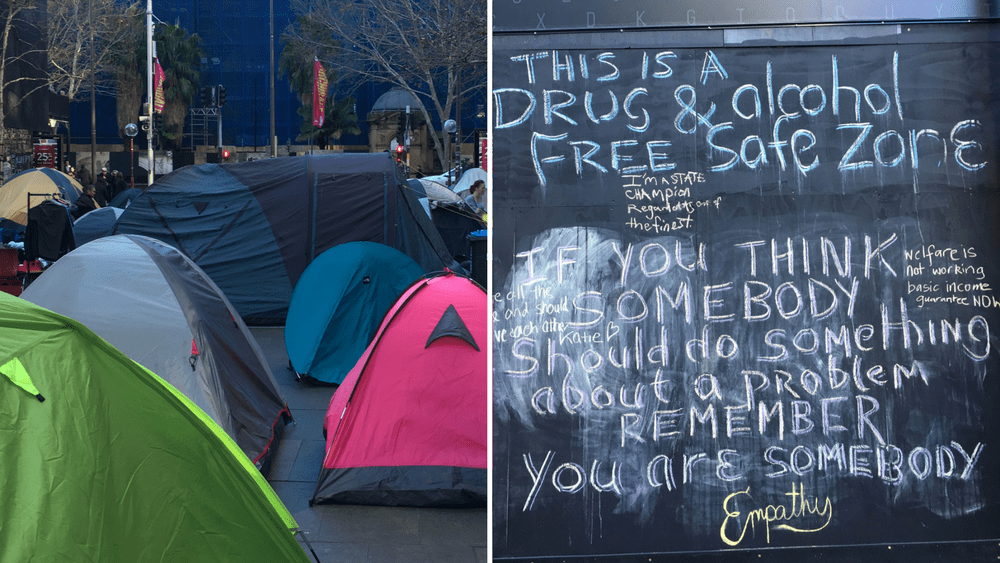 Is homelessness too big for Christians to tackle?

Just up the road from Eternity‘s office in Sydney, a tent city of homeless people – outside the Reserve Bank HQ in Martin Place – is reaching its last days. Despite the arctic winds that whistle down between the tall towers, the protestors have hung on and forced the City Council and State Government to make at least some small gesture towards solving the homelessness crisis.

“The reality is that homeless people are with us throughout the year – and the overwhelming majority do not live rough,” writes Graeme Cole in an opinion piece for Eternity. “Of Australia’s 105,000 homeless people, less than one in ten live on the streets.”

Cole makes the point that homelessness is a much bigger problem than the Martin Place protest. It involves many more who are “couch surfing, sleeping on the lounge room floor of a family member or friend, in a garage, caravan or boarding house. Some would not even call themselves homeless because they have a roof over their heads.”

The ongoing issue of homelessness in Australia raises a question for Christians, who are called to love their neighbours as themselves: What can they do to help the homeless?

To address this, Eternity contacted several Christian groups and charities which already serve homeless people. In the far west of Sydney, Christ Mission Possible (CMP) is run alongside of a small Pentecostal/Charismatic church called the Rock Community Centre.

“We fight homelessness, hunger and poverty,” says Martin Beckett who doubles as pastor of the church and CEO of CMP. “Working with a group called Hands and Feet, we take food into the streets, into Martin Place on Friday nights.

“We provide food relief to 18,000 people a week through what we call ‘assertive outreach’, using free food shops. Ten per cent of our customers are homeless, with the others at risk of it.”

CMP provides overnight crisis accommodation for 72 people a night, referred to them by Housing NSW. For people seeking a permanent solution, CMP taps into the private rental market, housing about 300 people a year – guaranteeing local landlords that the clients will be good payers.

“The government needs to do a lot more for sure, but what I ask is: ‘What are the churches and the general community doing?'” says Beckett.

On a much larger scale, the Zero Project is an international network of cities committed to ending chronic homelessness. The Zero Project’s aim is to match the need for housing with supply. “Functional zero homelessness” occurs when the number of people who are homeless in a city on any given night is no greater than the housing placement availability for that night. Anglicare SA is part of a group investigating whether Adelaide should commit to the network.

Rough Edges is a “lounge room for street people, a safe place for people on the streets.”

Recent research shows that it costs a state government more to keep a person chronically homeless than it costs to provide permanent supportive housing to end homelessness. “Over a 12-month period, people who were chronically homeless used state government funded services that cost approximately A$48,217 each,” researcher Cameron Parsell of the University of Qld reported in 2016. “Over another 12-month period in which they were tenants of permanent supportive housing, the same people used state government services that cost approximately A$35,117.”

Some of the Martin Place tent dwellers might end up in a new 42-bed facility at nearby Darlinghurst which is being developed by Hammondcare. This independent Christian charity is working in partnership with a local church, St John’s Anglican, that runs a decades-old ministry called Rough Edges. That ministry is described on its website as “a lounge room for street people, a safe place for people on the streets. It’s an open door for absolutely anyone to come in and experience hospitality.”

Christians who meet homeless people on the street have to make up their minds how to offer help on the spot. But whether at the scale of Christ Mission Possible (which is just one small church reaching out), or at the level of Anglicare or another large agency, there are plenty of opportunities to get involved.