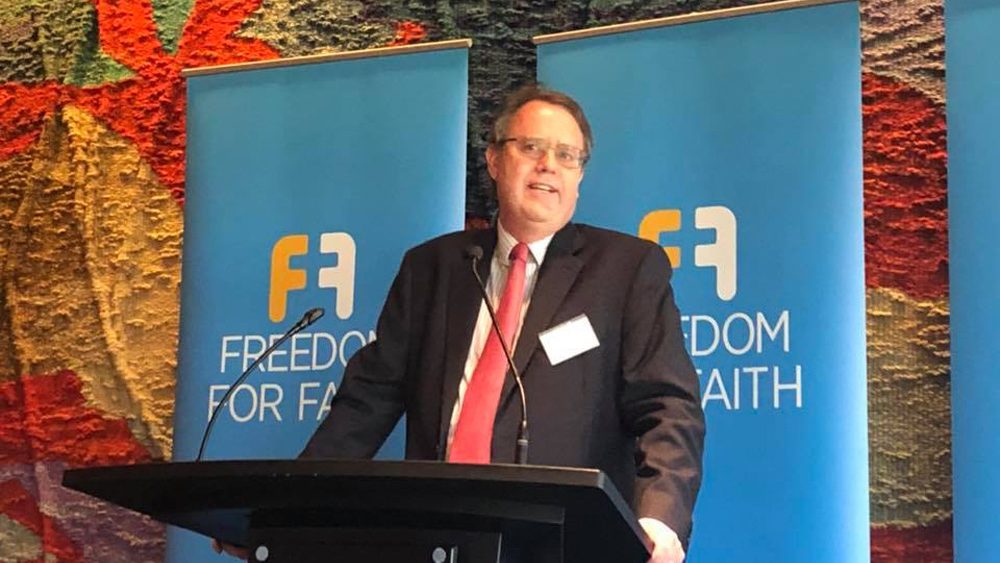 A day-long legal think tank featuring some of Australia’s best legal brains was held today, focused on explaining how to turn the draft Religious Freedom Bill into a much better one – with a government that is prepared to listen to proposals from faith communities.

A key theme of the day was how to avoid having courts or tribunals judging what is the doctrine or teaching of a religious body.

This possibility arises because the bill protects religious bodies if they act in ways that may be “regarded as being in accordance with the doctrines, tenets, beliefs or teachings of the religion” in section 10. This includes schools, theological colleges and charities.

Employment practices – for example, in the case of teaching staff of a religious school – may not be adequately protected by section 10.

“The problem is that while some organisations with 100 per cent faith-based staff can show a link to a doctrine of the faith, referencing a critical mass of faith-based staff does not (directly) arise from doctrine,” Parkinson said.

Pragmatic decisions such as the proportion of non-faith-based staff to employ, or in the case of some schools what percentage of students from Christian families enrol, are hard to link directly to doctrine.

Parkinson suggested that adding “or for a religious purpose” to section 10 might overcome this difficulty.

One of the strongest protections in the bill is clause 41, which states that “Statements of belief do not constitute discrimination.” However, this does not apply to statements that “harass, vilify or incite hatred.” Senator Stoker noted that rules of legal interpretation mean that “vilify” must be something other than “harass” or “incite hatred”.

“Let’s define ‘vilify’ correctly,” said Foster. “We need a high bar for vilification so that people who are simply offended do not become complainants.”

“The question of which right is privileged in legislation is in the eye of the beholder. What is seen as shield by some is seen as a sword by others.” — Justice Sarah Derrington

Freedom 19 was told that protection for out-of-hours activity by workers needs strengthening.

“The so-called ‘Israel Folau’ clause is subject to significant constraints,” said Aroney. “Employers with over 50 million turnover can argue ‘unjustifiable financial hardship on the business’ and government workers are exempt.

“Does this mean that employers with a lower turnover are exempt?” he asked. “The unjustified financial hardship clause will cause unintended consequences, as it will allow pressure to be exerted from third- party sponsors and organised social media boycotts.”

While Equality Australia, which campaigned for same-sex marriage, has complained that the bill overrides the Tasmanian anti-discrimination legislation in order to avoid a repeat of the complaint against Archbishop Julian Porteous on the grounds of offending an activist, Michael Quinlan told the conference that the bill did not go far enough.

The Institute for Civil Society’s Mark Sneddon argued that the bill should make it clear that stating a religious view on sexuality was protected. Unlawful religious activities are not protected by the bill, which Sneddon said needs careful redrafting. “What if a state law makes sexuality conversion therapy unlawful?” he asked – as proposed in Victoria. This ban might make “benign activity” such as prayer unlawful, which would therefore not be protected by the bill.

“It is unclear whether religious institutions that are corporations are protected from religious discrimination,” Sneddon said. He gave the examples of a locally incorporated Baptist church or a publishing company. His view was that the Folau clause only works for a large employer.

“The detail is lacking in the bill  and therefore this undermines protection,” he concluded.

Justice Sarah Derrington had had to rewrite her speech after the Attorney-General launched the draft bill and narrowed the ALRC’s terms of reference . She was unable to comment on the bill as the ALRC has been told not to. The ALRC is required to look at the removal of the religious exemptions in the Sex Discrimination Act and some other anti-discrimination laws.

She made the point that she was “unable to propose any solution that would guarantee the rights of religious institutions.” This was because we are “unable in law to guarantee which right would trump another.

“The question of which right is privileged in legislation is in the eye of the beholder. What is seen as shield by some is seen as a sword by others.”

She used the example of race to show that religious doctrines and practices do evolve concerning attitudes to protected attributes – although secular attitudes revolve more quickly.

Speaking personally, rather than for the ALRC, she suggested an approach to redrafting the Sex Discrimination Act (SDA), removing the religious exemption. She presented a possible new section for the SDA instead that could apply to justifications for discriminating in refusing the use of mosques or churches, enrolling school students and employment of staff.

This would apply when “acting on belief of religious institutions for those acts intimately connected to teaching and doctrine of the faith.”

Derrington’s tightly drafted proposal involved a series of balancing rights under the SDA and religious freedom. A further example was the provision of facilities, goods and services. A religious body could provide these on the basis of its religious teaching to their own community – but if offered to the public it would be unlawful to discriminate.

A solution to the dilemma of having courts and tribunals interpret the doctrine of religious institutions raised at the top of this story was proposed by Derrington, who wants it treated institution by institution.

“I am trying to avoid having a secular institution interpret doctrine,” she said in response to a question from Foster. “Institutions should set out their doctrines clearly.”

“It is vitally important that we are talking to both sides,” he added. “Talking to Labor in opposition. There is a recognition that they have stuffed up and not paid attention to people of faith. We need to draw both sides of politics into these issues and find the centre ground, and then go forward.”

There will not be a religious discrimination debate in federal parliament this year, however a…