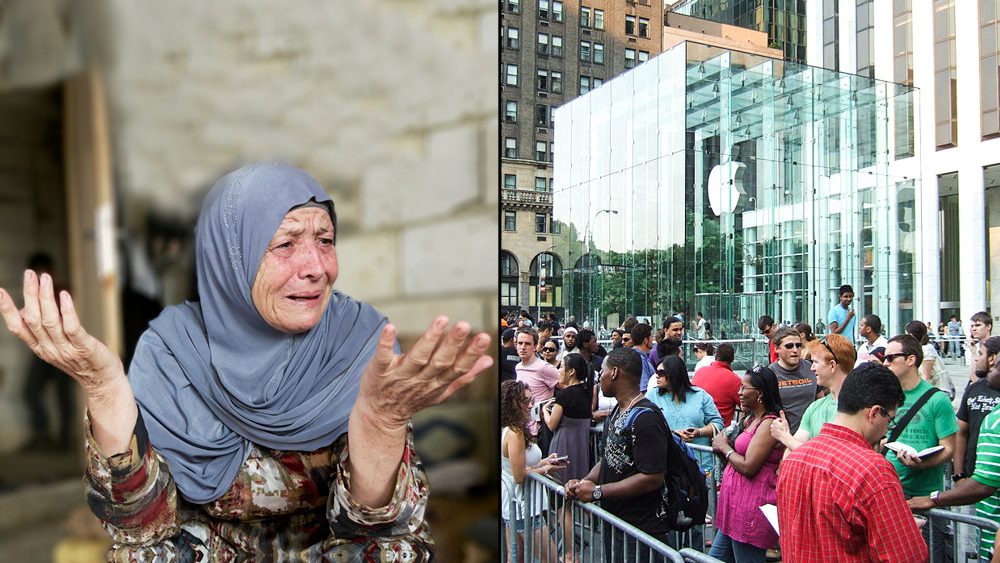 Confronting the idol of consumerism

Christians urged to be more generous

Christians have been challenged to live differently in our consumerist society, by giving up some of their luxuries or matching what they spend on an overseas holiday with a charity donation.

Gershon Nimbalker, Advocacy Manager of Baptist World Aid, made the call for Christians to be more generous at The Justice Conference, hosted by Tear Australia, which attracted 1100 Christians interested in social justice in Melbourne last weekend.

It was the third Justice Conference held in Australia and had the theme: Love Thy Neighbour.

“For those of us that live in the affluent Western societies that we’re a part of, consumerism has become probably the biggest idol that we face in terms of our connectedness to God, sapping us of our capacity to be generous and causing us to be complicit in a system of exploitation,” Nimbalker said at an elective session on Confronting Our Consumerism.

“It allows us to consume more than we need to and that’s compromising the world’s ability to sustain itself, but we don’t even notice it because we’re completely entrenched in it.”

Not one person said they wanted to be able to make more donations.

Nimbalker, who worked as a financial planner before joining the NGO sector, demonstrated his point by asking the group of about 200 to call out their short-term, medium-term and long-term financial goals. Not one person said they wanted to be able to make more donations.

He pointed out that Australian Christians currently give an average of 2.6 per cent of their income to charity, which was lower than the 3 per cent given by the broad Australian community during the Great Depression.

“We’re investing so much on getting our phones, getting our new TVs, buying cars, saving so we can retire as early as possible, we’ve narrowed down our capacity to see the need around us and respond to it in ways that we should be,” he said.

An example of how consumerism had skewed our society’s values was the $US7.5 billion Apple collected during the launch weekend of the iPhone 6 – far more than the $3bn the UN was able to raise in a year from governments and private donors to meet the basic needs of Syrian refugees.

“In one weekend, we collectively gave $7.6bn to Apple. Apple’s revenue of about $185bn a year dwarfs the global humanitarian aid budget. We spend more on Apple products than collectively we give for the overseas development system. It’s mind-blowing.”

“If they don’t have at least one international holiday planned each year, they’re missing out.” – Gershon Nimbalker

He quoted Australian Bureau of Statistics figures from 2010 that show as a nation we are spending 25 times more on recreation than on giving.

Nimbalker, who is young enough to be a new dad, pointed out that his parents’ generation would travel internationally maybe once every ten years.

“It was this big thing that everyone saved for. My generation, my friends, if they don’t have at least one international holiday planned each year, they’re missing out, they’re falling behind … Our material expectations have just continued to ratchet up.”

He believes churches have been infected to a degree by the prosperity gospel in the sense that Christians feel they need to demonstrate that they are “a beacon of blessing.”

“The church is just grabbing the wholesale values of capitalism and consumerism and painting the Jesus brush over them. Saying ‘this is what society wants of us – let’s find a way to make that Jesus-like. This is God’s blessing upon us.’ I struggle to find that as I read through the gospel stories, as I read through the prophets of the Old Testament, as I read through redemptive arc of creation – I can’t see it there.”

“The church is just grabbing the wholesale values of capitalism and consumerism and painting the Jesus brush over them.” – Gershon Nimbalker

What is needed, he said, is a redefinition of the good life. When we say we need a new TV, we are buying into the myth that consumerism will give us the good life while fracturing our relationship with God and with others.

Nimbalker quoted a Credit Suisse report that shows Australia is the second-wealthiest country in the world behind Sweden. In Australia, median wealth stands at $213,000, far higher than the equivalent figure of $45,000 in the US.

“We are one of the richest nations in the world and we’re still struggling to find money to donate,” he said.

“767 million people live off $US1.90 a day. Australia’s average daily income is $US104 and we donate about 61c of that to charity – the tiniest proportion. We’re stuck in this cycle of going ‘how do we look after ourselves, how do we enjoy the good things for us and our immediate loved ones?’ But we’ve been taught that that’s the good life. We’ve been sold a lie, we’ve been absolutely sold a lie.”

To back up his claim that increased prosperity does not equal the good life, Nimbalker said there had been no increase in Australians’ life satisfaction, as measured annually by Deakin University, since 2000 at the same time as real incomes had continued to grow.

“So, for me, it’s time that we start re-evaluating what is the good life. God tells us the good life is found in love for God and love for our neighbour,” he said.

“Now, love for our neighbour engenders us in wanting to share the good things that he has created with everyone.”

He suggested three actions to do this: be generous, be vocal and be fair.

“God tells us the good life is found in love for God and love for our neighbour.” – Gershon Nimbalker

“The ‘be generous one’ is hard,” he conceded. “Find things that are not needs but wants, cut some of them out so you can be more generous. Or if there are things that you really do want, maybe think about ways you could match that with a donation to help people that are in need,” he said.

“It could be something as big as the next overseas holiday you go on – it’s a big-ticket item –  you’re going to donate that exact same amount to a charity that’s helping people.”

“When you consume, try not to consume in ways that exploit the poor and exploit the environment.” – Gershon Nimbalker

Nimbalker is in a good position to urge people to “get out there and advocate.” As the compiler of the annual Ethical Fashion Guide and Ethical Technology Guide, he has seen how powerful advocacy can be from individuals.

He noted that Nestle had recently certified all its supply chain free from slavery and child labour in response to pressure from 30,000 people who sent the corporate giant postcards protesting against its use of child slaves in Ivory Coast and Ghana.

“That’s because as a a church we chose to consume differently,” Nimbalker noted.

Third, he urged Christians to: “Be fair. When you consume, try not to consume in ways that exploit the poor and exploit the environment. Find ways that help them and liberate them.

“Learning to consume ethically is one of the biggest challenges you will have in a consumerist society. Start living differently.”

Christians challenged to give up lifestyle and travel gods

Christians challenged to give up lifestyle and travel gods

Crowd-sourced approach to the subtle risks of consumerism

World-changing power in the palm of your hand

World-changing power in the palm of your hand

Text giving is set to give Aussie charities a boost

“Six consecutive cuts to Australia’s international development is a failure of moral leadership.”

Fair traders urge Aussie Christians to get on board

The forces that we’ve always assumed hold us together as societies are all weakening, says Tim Dixon