Church service on the beach as Navy vessel remains offshore

Thirty or so people attended a solemn church service on the beach at Mallacoota yesterday to pray and think about the bushfire that devastated the small Victorian town on New Year’s Eve.

The Australian navy has evacuated hundreds of stranded people from the East Gippsland holiday town in the past few days, but the local Anglican/Uniting Church minister, Jude Benton, led local Christians in church at Bastion Point anyway.

As she read Psalm 13 – a psalm of lament – and led prayers, a Navy ship was anchored offshore and at one point a Chinook helicopter carrying a supply load flew overhead. 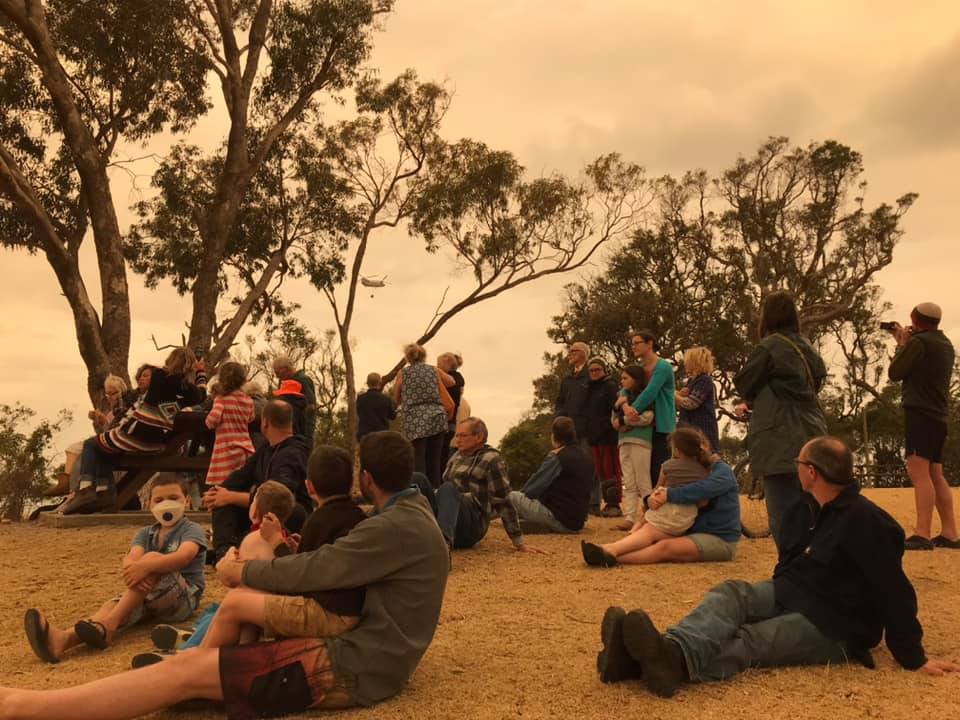 A Chinook helicopter can be seen overhead during yesterday’s service

The noise of the massive helicopter interrupted prayers and provided a lighter moment, said Chris Mulherin, an Anglican minister who was in Mallacoota to support the Theos beach mission for local youth.

Mulherin and his wife Lindy have stayed behind to clean up the youth centre and provide support to local residents but were today weighing up whether to take their last chance to fly out this afternoon or tomorrow morning.

“We’re trying to support Jude, she’d like a bit of support, and trying to work out whether we should be taking the last plane out because once that plane’s gone … it’s still looking like the roads will be closed for at least a week,” he said.

“The op shop is inundated with goods and people looking for goods – so Lindy’s been helping in there – and they’ve cleaned up the church, just doing basic stuff. Don’t portray us as heroes.”

Mulherin said a lot of people have left the town, both locals and campers, so they needed to decide whether they could be seriously useful if they stayed or whether they would be a burden on local resources.

“Jude, the local minister, told us she would really love to have us around, so just for moral support for her even and others. We keep bumping into people who just want to talk,” he said.

“It’s one of those situations where you pray for wisdom because there are so many unknowns and that’s how it’s been for the last week where it’s hard weighing things up when you don’t know what you’re weighing up.”

The Mulherins had been upset to be accosted by a woman yesterday who angrily demanded to know “where’s God in all of this? – God’s abandoned us.”

“She’d had a couple of drinks and she was very cranky. And that’s upsetting because in that sort of circumstance we’re the representatives of God and she’s taking it out on us,” he said.

“But they are natural questions and I guess in the church service too Jude was very clear that we’re here to support one another, to pray, listen to the psalms of lament, we’re not here to sort out the questions of good and evil and where is God in all this?”

Mulherin said it was interesting that in a situation like this, where people feel powerless, they tend to engage in a blame game.

“So there have been lots of conversations about forestry management and what should have been done and what wasn’t done. People want answers, people are understandably upset and looking to resolve that in some way. One way of resolution, people think, is find fault, find the cause, someone to blame.”

He said it was easy with hindsight to say the beach mission should not have come to Mallacoota in the first place, “but this team has been coming back and had a commitment to the local youth who look forward to us coming every year,” he said.

“And when they left on the 28th of December in the morning it wasn’t nearly as clear what was likely to happen.”

Please pray (and donate if you can) for Firies, the newly homeless and all in distress.