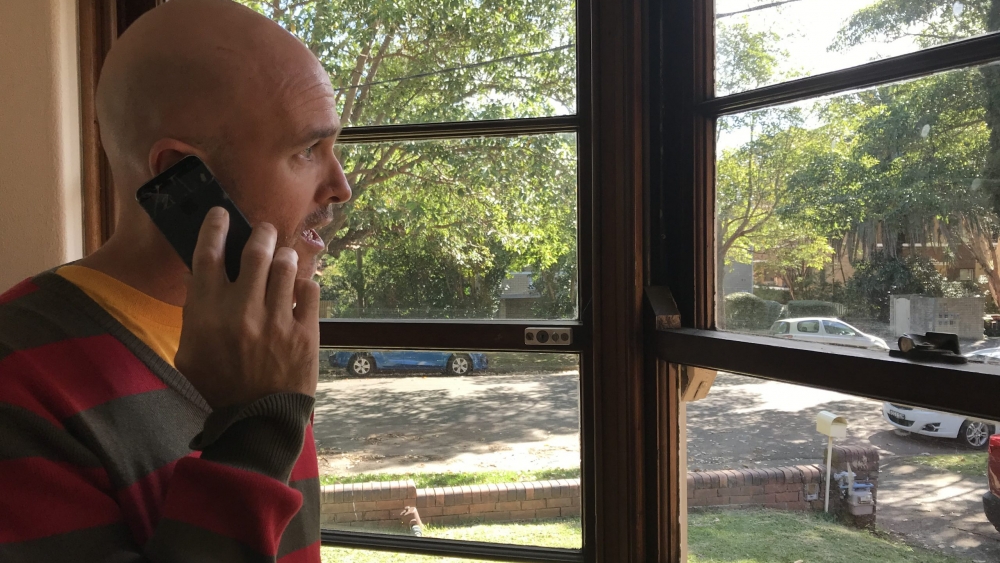 Talking to John during this time of self isolation.
Australia coronavirus

Sharing life in an aged care facility from a distance

You’re right, that no longer is unusual. But my mate John lives alone, in one room, at a residential aged care facility in Sydney’s inner suburbs. His immediate family have died. His closest relative is his lovely sister-in-law, who takes great care of John’s finances, as well as keeping in regular contact with him.

John was already isolated and distanced before COVID-19 struck.

John is closing in on 70 years old. He has been at his place since his early 40s, when he had a stroke. Needing a walker to get anywhere, and with only one working eye, a cough that just will not go, and mental health issues involving voices and “turns” (as he describes them), John was already isolated and distanced before COVID-19 struck.

Now, well, John is alone. Thank God he has a telephone and a TV. Otherwise, darn. My lower lip trembles at the thought. For as much as I am experiencing isolation (with my family) like never before, John is next level. From my end of the phone, I have a window into his confined world. A world I can sort of understand more now, thanks to social distancing and becoming a shut-in like everyone else.

Don’t get me wrong, though. In no way am I stacking up my experience of the pandemic restrictions with John’s. As he and I discussed before all this, life already was a struggle for John. Going to church every Sunday helped, so too did mateship and sport. But beyond that, the monotony and medical issues of his daily life meant life is an incessant battle for John. A long, wearying campaign against the frailty and frustration of mortality.

Actually, how John has coped through the COVID-19 measures has been impressive. I told him that in one of our chats. And there’s been a win this week. Thanks to visitor restrictions being eased in New South Wales, like many other states, I’m going to see John at lunchtime tomorrow. Outside where he lives, and at a safe distance. But it’s going to be amazing to be in the same physical place as the one person I have had almost daily contact with, throughout this COVID-19 season (or whatever it is we are calling this bizarre, disrupted time).

I’ve known John for about five or six years. We met at our church. He’s one of the older members and I thought it would be cool to get to know him more. Get some wisdom and mateship from a bloke who, clearly, has gone through a bit. So we have had a sturdy friendship for several years, despite me knowing precious little about NRL or Australian cricket and John being a MASSIVE sports fan. Huge.

Yes, the international absence of live sport has hit John. Hard. He’s probably cheering loudest about NRL’s proposed start date of the end of May.

I visit John every week or two. I mean, I did before all this. But now I haven’t physically seen John since, um … I’ve already lost track of when the coronavirus constraints set in.

I know how selfish that sounds – and sometimes I am being selfish.

Before COVID-19 descended, John called me every day or two. When the virus first gripped Australia, the calls increased. He’s got other mates he speaks with, like his lifelong friend Ern and our mutual church friend Andrew. But several times per day, John would press my saved number on his landline.

Trading sports channels for news, John wanted to talk about the latest statistics, shutdown measures and how the world appeared to be only minutes away from Jesus coming back. Other times, we’d delve into family history, or what we had for lunch, or briefly discuss different truths in the Bible about assurance of faith in Jesus, or how prayer is a powerful tool for coping and persevering. Praying over the phone with John is a modest privilege for me.

When John calls, though, I don’t always pick up. Like today, as I am writing this ABOUT John and our talks and my phone is ringing.

I know how selfish that sounds – and sometimes I am being selfish. I can’t spare the time or ramp up the brain space to have a chat. I try to force myself to recognise how my mate John has it much tougher than me. But that doesn’t always force my finger to press the answer button.

With John’s horizons being limited to his room, TV (radio, occasionally; John has no internet connection) and health, our conversations can be cul de sacs.

For a longer period of time than I’d like to admit, I thought our phone chats were largely hemmed in by John being hemmed in. But I finally realised how arrogant that was because, just like John, I also bring barriers to what we can talk about.

Wonder what we will talk about?

John’s actually been really patient with me over the years, even though my level of sporting banter has only barely increased – and that is only due to the information and asides that John shares with me.

Sure, we can sometimes talk about the same thing over and again – but that’s not because John doesn’t try to explore whatever I’m in to. He’s generous with asking about my wife Amy and our two daughters. He can follow along with me talking about work. And if he is feeling well – depends on the day, really – we can get into some pretty cool conversations about God, Jesus, the Bible, faith and doubts.

Tomorrow is going to be weird and wonderful as, for the first time in yonks, John and I will have a chat. Without our phones. In person. Like we used to do. Except for being on the other side of stricter social isolation.

Wonder what we will talk about?

Have you seen, been given, or handed out to your neighbours a card offering help…