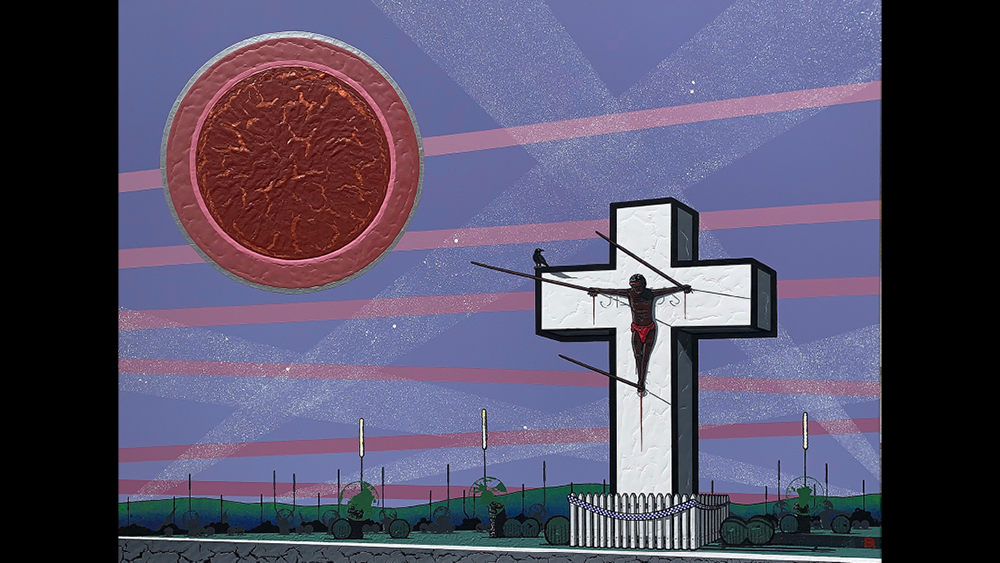 One of the startling artworks from Stations of the Cross exhibition: Three strikes and you're out
Blak Douglas
Australia art

The Passion of the Christ through modern art and personal lives

You may think the public “disrobing” of George Pell and the impact of white colonialism have very little to do with the Easter story. But these are just some of the surprising reinterpretations featured in the Stations of the Cross art exhibition that opened this week in Sydney.

Now in its 11th year, the annual exhibition is a joint venture between Northmead Uniting Church, in Sydney’s northwest, and Northmead Creative & Performing Arts High School, where Stations of the Cross is currently being held. It features an array of original works from 15 Australian artists, including the Archibald prize winning Sydney-based painter Euan MacLeod. Nine of the artists are new to the exhibition this year, and the diversity of work on offer ranges from paintings, carvings and sculptures to video and digital art.

“What it’s like to carry your cross and what’s the weight under which we walk?” – Doug Purnell

“I don’t ask artists because they’re Christian or religious. I ask them because they’re good artists,” says co-curator of the exhibition Doug Purnell, who is himself an artist, as well as a retired Uniting Church minister and member of Northmead Uniting.

The “Stations of the Cross” (otherwise known as ‘Way of the Cross’) is a visual representation of Jesus’s path to crucifixion – from his sentencing by Pontius Pilate to his death and burial – through a series of 14 scenes or “stations”. However, unlike the traditional format, based on centuries-old Franciscan tradition, the Northmead exhibition also includes a 15th station that explores Jesus’s resurrection.

A more significant point of difference is the exhibition “interprets the suffering and passion of Jesus’s journey” through the artists’ own lived experiences.”

“In the present exhibition, what people are doing is addressing, in deep ways, the life they live,” Purnell explains to Eternity.

He describes the experience of viewing the stations as an “existential prayer” that raises questions like “how do I live when I know that I’m mortal?”

“It is significantly about suffering … What it’s like to carry your cross and what’s the weight under which we walk? What’s the suffering that people experience? In a way, you can’t run away from the suffering; you actually have to engage it.”

One of the artworks featured is MacLeod’s painting for station 13, where Jesus is taken down from the cross. When considering the focus of his station, around the death of a child, MacLeod ended up painting the closure of Watters Gallery, where he had exhibited for 36 years.

“This is a classic image in history called ‘the Pietà’ or Deposition,” explains Purnell, referring to a 15th Century sculpture depicting Jesus after he had been crucified, being held by his mother Mary. “But what Euan’s done is to think into what this means for him … That’s a really powerful connection.”

Purnell notes another standout work: a life-sized steel sculpture of a tiny lamb by Harrie Fasher, which sits alongside a drawing of the nailed feet of Christ and “an Indian offering washed up from the ocean,” which combine to represent Jesus being nailed to the cross and the idea of sacrifice.

“For me, she’s touching something deep in life … She’s breaking open stories that I’ve heard and shared, but in a way that makes me again think of just how gentle and fragile life is, and of God’s presence in life,” says Purnell. 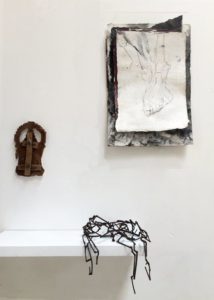 Station 11 – Jesus is nailed to the cross
Paddock Find/Lamb, Offering 1 and Navicular by Harrie Fasher

“The works talk to each other in interesting ways,” Purnell continues, noting a painting by Rodney Pople on the disrobing of Cardinal Pell to reflect the stripping of Jesus. He also highlights a painting by Indigenous artist Blak Douglas which “asks tough questions of us as church about the imposition of white religion on black community.” 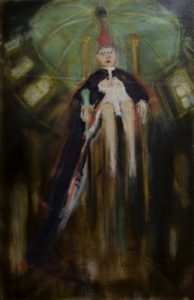 Purnell believes the diverse viewpoints in these artworks lend the Easter story greater accessibility and universality.

“The Christian Church for a very long time has been very defensive about its story. When you defend words, it’s easy to move towards fundamentalism. But when you move into the sphere of art and images, the story becomes more open to multiple readings … What I’m finding overall is that there’s much more space for conversation.”

“[The exhibition is] not one group trying to impose a view on another group or saying this is the right way and the wrong way, but this is the journey – we have to work out what the journey means for us and how we’re going to live in the light of that.”

This is particularly important, he says, when engaging with the diverse audiences the exhibition attracts, including school kids, the arts community and those from church backgrounds. Since the exhibition began in 2007, it now attracts more than 850 people each year, and has a string of associated events, including an open Good Friday service, a grief workshop, and jazz night.

“It’s very hard anywhere in the contemporary culture to tell the Christian story in a credible way.” – Doug Purnell

Last year the exhibition was also shown at the Australian Centre for Christianity and Culture in Canberra. In organising the annual exhibition, Purnell is now assisted by co-curators Christopher Auckett (who is on staff at Northmead Creative & Performing Arts High School) and Jenny Little, an artist who has had works in every Stations of the Cross exhibitions.

“It’s very hard anywhere in the contemporary culture to tell the Christian story in a credible way,” says Purnell. “For the Northmead congregation, their commitment to the exhibition is this is the only way we can make some form of proclamation of the story outside the boundary of our church.”

He also notes the value of this from an artistic standpoint: “As a church we bring the work or major artists into the local high school so the kids get to see that.”

Purnell is hopeful that people will make an annual “Easter pilgrimage” to see the exhibition and “walk the way of the cross through its contemporary reading.” In doing so, he also hopes it will open conversations about the big issues of life and death.

“Somewhere in the rhythm of the year you’ve got to have a time where you reflect on the power of death in our society and in our lives, and the possibility of hope and resurrection.”

“What I want for people to have at the end is an awareness that the mystery of God is continuing to break into our world. If people are alert to that, they will live fuller, richer lives.”

The exhibition is open until Easter Sunday, April 21. For more details visit the Stations of the Cross Facebook page.

Stations of the Cross

Shortly before the crucifixion of Jesus Christ, Pontius Pilate, a Roman bureaucrat stuck between a…

The Gospels provide many fascinating portraits of Jesus – as teacher, healer, prophet, judge and…