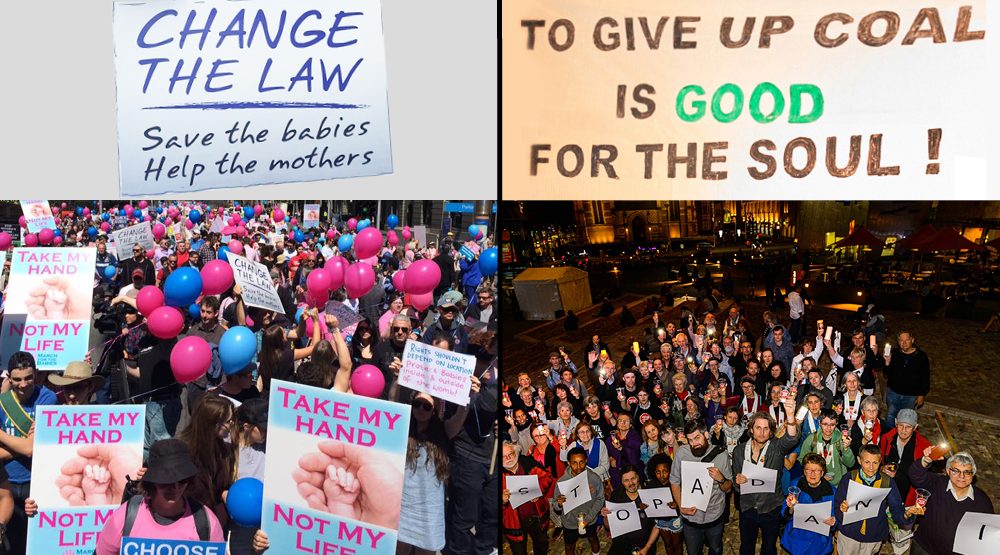 One was calling for an end to abortion. The other, an end to coal mining. And the two protest movements, often considered on opposite sides of the political spectrum, attracted thousands of protesters at the weekend.

A nationwide day of action against Adani’s controversial Carmichael coal mine in the Galilee Basin of central Queensland prompted rallies in Sydney, Brisbane, Melbourne, the Gold Coast and Port Douglas. Protesters flocked on beaches, spelling out “#Stop Adani”. 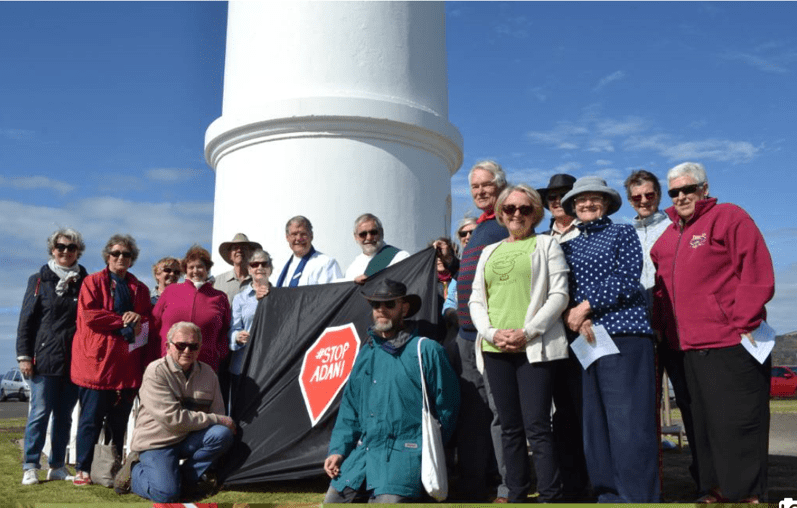 A prayer vigil was held in Kiama (pictured), and other parts of Australia, as part of the national day of action opposing the Adani coal mine in Central Queensland. Australian Religious Responses to Climate Change

One protester, who formed part of the foot of the “P” at Bondi Beach on Saturday, was Byron Smith from Common Grace, a movement of Christians who say they are “passionate about Jesus and justice.”

“We think that this mine is an affront to our creator and will cause widespread harm to creation.” – Byron Smith

“As followers of Jesus, we want to honour our creator and love our neighbour. We think that this mine is an affront to our creator and will cause widespread harm to creation. In doing so, it will also seriously impact many of our neighbours around the world,” Smith said.

Thea Ormerod, president of the Australian Religious Response to Climate Change (ARRCC), said hundreds of Christians, Buddhists and others from a range of religious traditions attended the protests across Australia and prayer vigils in Sydney, Melbourne and Kiama, organised by the ARRCC as part of the day of action.

“The Wangan and Jagalingou are courageously defending their homeland.” – Thea Ormerod

“We are very concerned about the support being given by both the federal and Queensland governments for the Adani mine and rail project. In particular, ARRCC opposes the possible $1 billion loan from the Northern Australia Infrastructure Facility for a rail line, and the Queensland government’s decision to allow easy access to our precious artesian waters. All this at a time when a rapid transition away from coal and to renewables globally is rightly under way,” Ormerod said.

“Through these prayer vigils, ARRCC bears witness to our faith-inspired calling to protect our grandchildren’s future. We also stand with the Wangan and Jagalingou Traditional Owners whose land the Carmichael mine would desecrate. The Wangan and Jagalingou are courageously defending their homeland through the court system, and have been persisting in this for years.”

Meanwhile, in Melbourne, hundreds dressed in blue and pink and carried balloons as they marched from Melbourne’s Treasury Gardens to the steps of Parliament House to demand the repeal of abortion laws enacted in 2008, which grant women the right to access abortion services up to 24 weeks gestation. Abortion after 24 weeks requires two doctors to agree it is in the patient’s best interest.

“Christians will continue to speak up for the unborn, as they have done for centuries.” – Dan Flynn

Dan Flynn, the vice-president of March for the Babies, which organised the Melbourne rally, said there were 2000 marchers this year, a number on par with other rallies in its nine-year history. He said the group needed hundreds of security guards and police to protect pro-life protesters. This year’s rally was relatively quiet, compared with the rally in 2014 which attracted socialist and anarchist protesters clashing with pro-lifers as they marched. 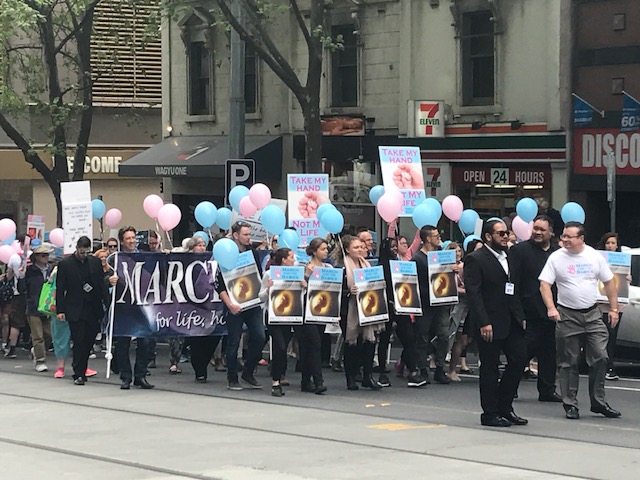 “It’s deeply disturbing that you have to have such protection just to have the discussion,” Flynn said.

“These protesters, particularly the young people involved on the weekend, aren’t really involved in the politics of abortion but rather the humanity of it: that there is a baby in the womb, a baby with a heartbeat, a baby that sleeps and a baby that kicks. That’s compelling. That’s what brings these young people out.”

The protesters wanted to let their politicians know that abortion is not a settled issue in Victoria, despite the legislation being in place for ten years.

“Christians will continue to speak up for the unborn, as they have done for centuries.”

Flynn said pro-life events did not get as much institutional church involvement as the issue deserved. “That may be because it is seen as a divisive.”

While Dan said he was aware of the Adani coalmine protests, he didn’t know of any Christians in Melbourne who were taking part in those events. But he did have a message for them:

“It affects literally billions of people, and it affects all of God’s creatures that live on this planet.” – Byron Smith

“I don’t see them as necessarily being in opposition,” he said.

“I think that being pro-life doesn’t just mean being pro-birth. It means wanting to care for our neighbours wherever they are found and standing against the harm that is happening to them, particularly harms in which we might be participating. I have a particular passion around climate harm because I think it’s an issue that is irreversible, it’s long-term, it affects literally billions of people, and it affects all of God’s creatures that live on this planet. There are very few other issues that have the same scope and long-term implications.”

Calling on Labor to block Adani coal mine

Lessons from the Last Supper

Lessons from the Last Supper

What can we learn from sharing a meal with our maker?

And Bono sent a tribute

Climate strikes to the heart

Climate strikes to the heart

“It is pretty much one hundred per cent that Jesus preached here,” our tour guide…