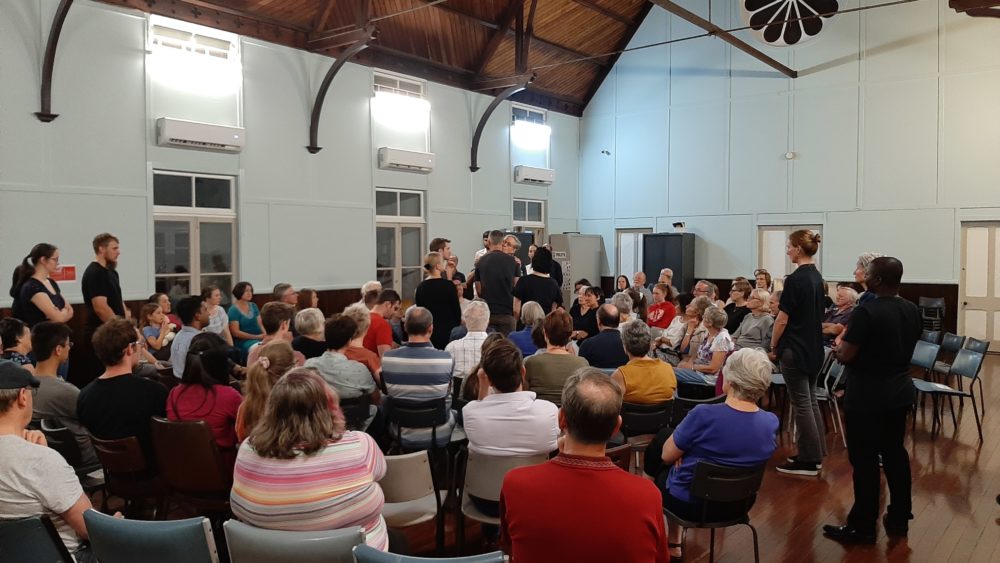 A new way to bring the good news alive

The first time Keith Benn saw The Mark Drama – an enacted storytelling of Mark’s Gospel – he didn’t expect to be emotionally affected by a story he knew inside out.

But seeing up close the relentless attacks that a Pharisee made on Jesus made Benn really angry.

“I expected him to attack Jesus, but I didn’t expect him to be unrelenting. I thought ‘this is over-the-top! Shut up!’ But he kept on doing it,” says the Brisbane-based Wycliffe Australia translation consultant.

The Mark Drama, created by British Bible teacher and playwright Andrew Page, is a 90-minute theatre-in-the-round staging created for 15 actors. It brings up close and personal the persecution Jesus faced and his suffering on the cross, leaving many in the audience in tears. Reflecting a resurgence of interest in Bible storytelling in the postmodern world, The Mark Drama has been hugely successful and is now performed in 20 countries in the world.

But one thing disappointed Benn about The Mark Drama – there was no resurrection scene (in accordance with doubts about last 16 verses of Mark.)

So when he heard the British playwright had also worked on an outline of John’s Gospel but had put it aside, he was intrigued.

Benn says Page had come to the conclusion that it was “too hard” to turn John’s Gospel into a compelling drama. Unlike Mark’s Gospel, which is non-stop action, full of miracles, and structured in a way that lends itself to drama, John’s Gospel is an exposition of many long sermons by Jesus.

“I’ve seen the Jesus actor crying so many times after he’s gone off after he’s been crucified because he’s totally emotionally drained.” – Andrew Page

Page also believed, Benn says, that the actor playing Jesus would be too emotionally exhausted after the crucifixion scene to be able to come back on stage alive.

“He said, ‘I’ve seen the Jesus actor crying so many times after he’s gone off after he’s been crucified because he’s totally emotionally drained – how could he have the energy to come back on and be alive?” says Benn. 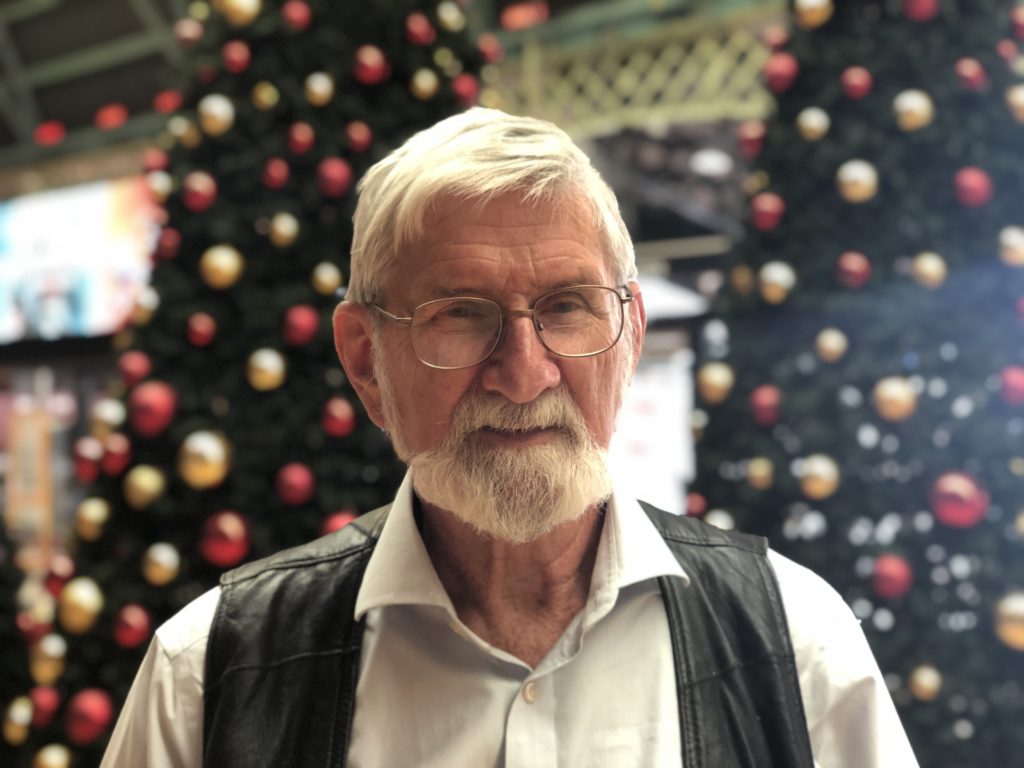 But based on his script-writing experience in the past, Benn could not resist the challenge and decided to take a three-month sabbatical from Wycliffe to bring The John Drama to fruition. He saw the project as an opportunity for Wycliffe Bible Translators to serve the church and develop a context for evangelism and discipleship.

“I love John – even the storytelling,” he says. “He’s got the Pool of Siloam, Pool of Bethesda, resurrection of Lazarus, because John gives a miracle and then a sermon. The miracles lead into the real thing, which is a sermon, for John.”

Benn’s method of bringing the sermons to life was to summarise the main points and break them up with interjections “so every sermon becomes a discussion, a dialogue acted out.”

“The pool of Bethesda has got 45 verses of sermon, so you’ve got to say, ‘what are the main points?’ Now John 5:16 has a verse which says, ‘From here on the Jewish leaders harassed Jesus.’ Now, it doesn’t tell how they harassed him, but I took that as a licence that whenever Jesus was preaching a sermon, the Pharisees would come in and disagree with him. So, he’d get two sentences out and they’d harass him and so Jesus would come back at them with the next thing,” he explains.

“If Andrew accepts it and lets it go in his system, then it’ll go to 20 countries and I don’t have to worry.” – Keith Benn

Benn followed the pattern in The Mark Drama of not changing Jesus’s words but giving a little freedom to ad lib to the disciples, Pharisees and crowds to comment on the action.

“I tried to follow the principles of The Mark Drama closely so that Andrew Page would accept it. Why? Because The Mark Drama is being played in 20 countries. [My Wycliffe colleague] Malcolm Barker has just led it in Bangladesh in Bengali language. If Andrew accepts it and lets it go in his system, then it’ll go to 20 countries and I don’t have to worry.”

The John Drama prompted many excited responses when it had its world premiere at Wynnum High School Performing arts auditorium, Brisbane, in August 2019. The actors wanted to do it again soon, while it was fresh in their minds, so they put it on again last November at St Andrew’s Anglican Church, South Brisbane.

At the outset, director Malcolm Barker stands and focuses the audience’s attention. He starts to speak one of the most famous opening lines in literature, “In the beginning was the Word”. Some actors crouch in a circle and as Barker continues his introductory soliloquy, Jesus – acted by schoolteacher James – moves towards the central actors. He is creating. He is sending light into the darkness.

Page said, “I cannot imagine that The John Drama will be as effective evangelistically as The Mark Drama.”

According to one of the cast, Paul Mercer, the audience and actors alike were energised and captivated by the end of each performance. “It put what I read into life” and “Very moving, powerful and inspiring” were a couple of the comments afterwards.

“As we learnt our lines and entry points, the story grew as a vibrant challenge in our lives,” Mercer reveals.

“I asked James why he took on the Jesus role. Jesus speaks and speaks in this gospel, so the learning task was extensive. Acting as Jesus demands a perspective of humility. James responded this way: ‘The Bible makes it plain that God chooses us for good works in Christ.’ James had a strong sense of his own ‘chosen-ness’ for his role. ‘Like everything God does, it turns out for better than I could imagine or invent,’ he said.”

Disappointingly, when Benn sought feedback on a video of the performance from Andrew Page during a visit to him in Southampton last November, Page said, “I cannot imagine that The John Drama will be as effective evangelistically as The Mark Drama.”

“I just kept quiet,” Benn said. “I was delighted that Andrew made the decision that he would organise a cast and do The John Drama in his church after the middle of this year.

“One of my friends who has been involved in The Mark Drama, said, ‘I prefer The John Drama to The Mark Drama. They are different. Mark is miracle-focused; John is teaching-focused. Mark has no resurrection appearance. John has three.’ And no, the Jesus actor had no difficulty in ‘being risen’ at any of the four performances in Brisbane! I think the two dramas complement each other.”

Wycliffe Australia sees The John Drama as a gift to local churches to share the gospel message in a fresh way with people at whatever stage of faith they are at.

Why not check out one of the upcoming performances and see what you think?

There will be two more performances of The John Drama at Christcliffe Presbyterian Church, Toowoomba, Queensland, at 7-8.30pm on March 28 and at 2-3.30pm on March 29. They will be followed by two more shows at Waterloo Bay Leisure Centre, Wynnum, Brisbane, on April 5 (3-4.30pm and 7-8.30pm). Entry is free.

For information about hosting The John Drama for your church or ministry, contact Keith-Benn@wycliffe.org.au; or Malcolm.Barker@ghd.com

Struggling young writer DJ Havel is stuck. She’s pregnant, on a deadline and reeling from…

“It would be good that every language group, every clan, has its own Bible.”

I learned the power of Bible storytelling in three days

I learned the power of Bible storytelling in three days

Can I tell you a story? Every week at my Bible and English class at…