“A lot of people come to our church because they want to visit an underground church, but they don’t know what they’re in for.”

Brian Underwood, a member of the Catacomb Underground Church in Coober Pedy in northern South Australia says every year, 10,000 tracts and Bibles are given away to tourists as they pass through town. 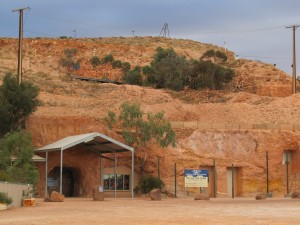 Ranked by TripAdvisor as the 7th most popular attraction in the old Opal mining town, the Catacomb Underground Church is an undeniable tourist destination, attracting travellers looking for a unique (subterranean) church experience.

Many of the tracts and Bibles are no doubt thrown away as tourists continue on their nomadic lifestyle, travelling light without realising the life-changing words they’ve received. But one man’s careless act is another man’s salvation.

Brian says a few years ago, a man who’d been living on the streets in a coastal town of Australia rang the church to tell them he’d found one of their Bibles in a rubbish bin and started reading it—he’d become a Christian and was now a street preacher, so he wanted to let them know.

Catacomb’s ministry to tourists, miners and cattle farmers is possible because of the support of Bush Church Aid, who fund the parish, and have done so for decades. 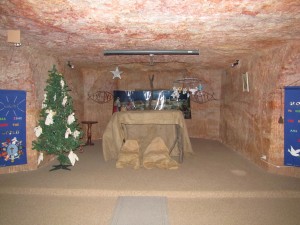 BCA sends fieldworkers to remote and regional places across Australia to support people living long distances away from neighbours and large networks of family and friends. Brian says they couldn’t survive without their support. “We couldn’t meet a minister’s wages and we certainly get the type of teaching that we get through a professional minister.”

Arriving at Coober Pedy in the 1970s with the intention of staying two years, Brian and his family never left. When they arrived he wasn’t a Christian, but his wife was. She wanted to send their kids to a Sunday School, so sent them to Catacomb. Before long, the minister became friends with the Underwoods and Brian gave his life to Christ.

“I guess it was through that ministry I realised where my life was going and that there was something greater that I need to commit to,” he says.

Brian says the demographic of the town has changed as the opal industry has gone from boom to bust.

“I mined for 35 years. We’ve seen the lows and highs of the industry, and almost been bankrupted ourselves, but your faith carries you through just about every hardship.”

Brian is so used to the Coober Pedy lifestyle he initially neglected to mention the church’s underground position to me during our conversation. “It’s just normal for us,” he said when I rang him up to later confirm what I’d read about the church online. And yet, it’s this striking feature (to those of us above-ground) which provides the church’s platform for their amazing outreach to tourists.

It’s a wonder that something so “normal” to Brian could be such a boon for the gospel. And it’s something Bush Church Aid is helping to keep alive; assistance Brian can’t speak of more highly. “BCA has been a big part of our life here,” he says matter-of-factly. “[Without them] we’d be stormied.”