Perhaps what makes James Cameron’s latest (ad)venture, Deepsea Challenge 3D, so compelling and so, well, charming, is its happy conflation of explorer with filmmaker in Cameron himself. This is just the combo needed to pull off an enterprise like this in our post-exploration, hyper-filmic age: he who makes the story, tells the story.

Cameron does spend some time musing on this double identity in the film itself. For most people, directing a series of the biggest box office hits in movie history would count as a pretty productive career. But following Titanic (1997), Cameron finds himself increasingly drawn to deep-sea exploration, and increasingly conflicted about his vocation. Is he a movie-maker with an interest in exploration on the side? Or should he park his Hollywood “day job” in order to follow his childhood dreams of pushing back the “last great frontier” – our oceans?

Cameron responds instinctively to the wonders of the world he explores in terms of worship, adoration, thankfulness. The vast, strange, forbidding reality of the ocean depths inspires no less.

In a world where it seems like everything is within the reach of Google, a world of post-crisis austerity and defensive individualism, grand visions of exploration and discovery seem fanciful, even naïve; relics of a less cynical age. Cameron wants to revive the wonder and the thirst of the noble tradition of human exploration for a new generation, and as a filmmaker – the true mythmakers of our time – he’s ideally positioned to make the attempt.

Deepsea Challenge 3D is a pacy mixture of history, science, personal memoir, and starry-eyed rhetoric chronicling a seven-year project to build a submersible that could take a human – Cameron himself – to the deepest place on Earth: the Challenger Deep, in the Mariana Trench between Japan and Papua New Guinea.

When Cameron floated the idea – after expeditions to the wreck sites of the Titanic and the Bismarck – there was no existing submersible with the capacity to withstand the pressure of the 36,000-foot dive. He assembled an international (and disarmingly ordinary-looking) team of engineers who proceeded to design their way around a whole raft of apparently insuperable difficulties. Their innovations included the vertical, seahorse-like design of the Deepsea Challenger sub and an entirely new form of syntactic foam (the commercial version failed stress tests). 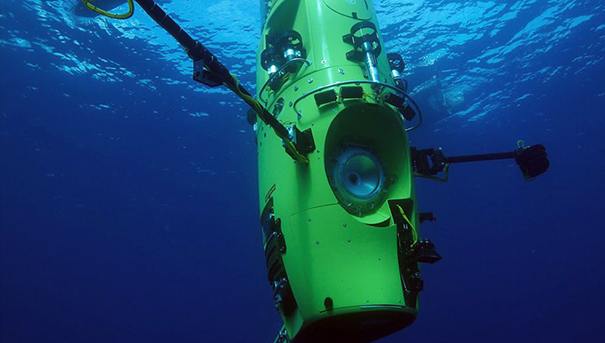 With the director’s unerring instinct for the line between enthralled and you-lost-me, Cameron guides us through the technicalities of the dive. The (mostly) light touch of the mythmaker is evident at every turn; at the core of the sub is “a steel sphere, FORGED in FIRE” (Cameron utters solemnly, the Mount Doom overtones pairing nicely with the hisssss of the forge). If your project leader and intrepid explorer is also the one who makes the movie, then the shaping of the narrative isn’t left until after the fact. From the choice to send a manned sub – “I want to see with my own eyes” – to the access-all-areas footage of team meetings and frantic deadlines and each of the actual dives, the project has an eye to the public imagination right from the start.

And the narrative Cameron constructs for us is of a very specific kind, a mythic tale of human aspiration and fragility foregrounded against the wildness and inexorability of the natural world. This is all there is – man and nature (and I do mean man; there are no women in the project team) – and Deepsea Challenge 3D rings the changes on their many possible interactions.

Cameron can’t quite decide whether man is part of this natural order, or a force outside it. “I’m a curious monkey and I want to see for myself”, he explains of his ambitions as an explorer; he invokes both some primal drive to know, and at the same time the cold mastery of empirical science. He can’t quite decide whether Nature is on his side or not. When things go well – when a rare or new species swims into the sub’s ken on a test dive – it is “a gift from the ocean”. When unpropitious weather threatens to swallow their window for the final dive to the Challenger Deep, what’s required is to pit themselves against the elements.

Thus agency in Cameron’s world is divided between himself – the prime mover of the whole operation from ocean to screen – and mysterious Nature. The divine is explicitly set aside. “This is my church”, Cameron avows during one dive. “Down here, alone … I feel the power of Nature’s imagination, so much greater than our own”. His marvelling reaches unconsciously towards a sense of purposefulness; the idea of a deliberately created order is displaced from a theological context and attributed as vibe to blind, impartial Nature. In spite of his secular convictions, Cameron responds instinctively to the wonders of the world he explores in terms of worship, adoration, thankfulness. The vast, strange, forbidding reality of the ocean depths inspires no less.

Deepsea Challenge 3D is packaged as real-life adventure story right from Day 1, and it does not disappoint. There are lots of hooks for Australian audiences here – the sub is built mainly in a little industrial space in Sydney’s inner west, the first test dive is conducted in Sydney Harbour and, when tragedy strikes the expedition, it’s by way of 7 News’ Mark Ferguson that we first hear of it – but it’s striking, once you scratch the surface, how profoundly American the whole thing is. “We weren’t there to plant a flag for any nation”, Cameron insists; the engineers hail from all over (UK, China, France, South Africa) and no governments were involved. But the rhetoric that draws the film together is unmistakably, buoyantly American. It’s reminiscent of certain American museums – that is, quite candidly geared towards moulding the limitless aspirations and the identity of the very young. James Cameron fulfils his boyhood dream (we’re given several scenes featuring a likely-enough-looking young Cameron), and goes on to wonder “what other kids will do”.

One of the avowed aims of the project (both dive and movie) is to call attention to the great exploratory work yet to be done – the deep ocean trenches collectively cover an unexplored area the size of North America. It may go against the grain for Australian viewers to enjoy something so optimistic, so unironic as this. But if we can set aside our natural cynicism, the cheesiness of Deepsea Challenge 3D does offer us a fabulous mythic blend of science, personal aspiration, and collective human achievement against the odds and in defiance of our physical limitations.

Natasha is a Research Fellow a
t the Centre for Public Christianity for 2014-15. She has a PhD in English Literature from the University of Cambridge and has held a number of short-term research fellowships at universities in Australia and the US. She previously worked in Learning and Teaching at the University of New South Wales, Sydney.

First published on Centre For Public Christianity, republished with permission.

Stu Cameron is Lead Minister of Newlife Church on the Gold Coast, Coolangatta and Brisbane.…

We are expecting our first baby. Today.

We are expecting our first baby. Today.

Right now, Chanelle Henderson and her husband Cameron might be dealing with COVID-19 constraints, as…

A Christian movie actually worth watching

A Christian movie actually worth watching

And would you take love advice from a hitman?

Alex Kendrick opens up about ego, criticism and identity

Why a Kiwi church took on Hollywood

Why a Kiwi church took on Hollywood

New movie Broken brings forgiveness to a cinema near you

The host is in the hot-seat. Anita Savage grills John Dickson on whether Jesus’ life is a matter of fact

My son has a wonderful disability

My son has a wonderful disability

New network forming within UCA as other options also pursued

After the fall: a post-Hybels world

After the fall: a post-Hybels world

PLUS: Dame Judi Dench and the danger of friendship across faith