A minister, a gay couple and a camera crew

It takes a brave person to be the “official” Christian on a reality TV show. And you would have to be even braver when you are billed as the “enemy” of a gay couple.

So it is clear that the Reverend David Ould, an Anglican Minister from Macquarie Fields in southwest Sydney is a brave man. That’s for sure.

But was he foolhardy?

I had to watch the first episode of SBS’s Living With the Enemy to check that out. The show has good provenance in the reality TV world, with executive producer Tim Toni being a former producer of Big Brother (and to be fair Four Corners and National Geographic).
The format is simple: what one reviewer called the “Wife swap treatment”: David and a gay couple, Michael Barnett and Gregory Storer, live in each other’s homes for five days.

Christians have to try harder to get heard than people with more fashionable opinions. That’s the reality.

As I see it, David is the one who has to travel further to reach the SBS viewer. He has more work to do to get his point of view across.

The way the show is framed does not help him. For example, the show opens with a narrative of a community struggling for affirmation against shots of the Sydney Gay and Lesbian Mardi Gras. The Mardi Gras is de-raunched and the more “out there” elements of it are not shown.

It’s a tightly edited show and this may have been a problem for David. We see him frowning a lot. On the other hand, red faces and raised voices are evenly shared around. There’s a couple of catty comments from Michael. Let’s score that part even.

At the risk of spoiling the ending let me reveal it all ends civilly. David suggests that he has learned more about having a conversation with people he disagrees with. Michael and Greg say the same thing. David says he’s learned you can be friends across the divide.

I think they are all sincere, which makes the rest of the show seem like the edited angry highlights. 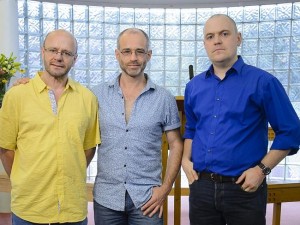 Or the awkward bits.

The first of these occur on day one when the cast meets up in Sydney and they go to David’s house. But it turns out that David has decided that he won’t allow Michael and Greg to sleep in his house for fear of confusing the children.

This is a version of the old conundrum of should Christians allow unmarried people to sleep together in their house. The narrator, actor Richard Roxburgh, the star of Rake, explains that the show’s producers “came to the rescue” by offering to put a caravan in David’s backyard. Was that coming to the rescue or imposing a faintly ridiculous solution that makes David look ungracious? And on David’s part I wonder if he had thought through the show’s premise of LIVING with the enemy? What is the difference between having a couple in your house or having them in the backyard caravan? We don’t get to hear about this, but I suspect the discussion in the producer’s office would have been worth filming.

The show’s most awkward moment comes on the second day when David brings breakfast stuff to the caravan.

Later that day there is a Bible study that does not go well. As David leads them from Genesis through Leviticus, the camera picks up Michael’s and Greg’s upset body language. “This is why we are in a caravan,” says Michael. “There is no sin because there is no God.”

“I don’t think you are right to use this book to tell me how to live my life and my relationship,” says Greg. “In my eyes this is hatred.”

Now, we’re mysteriously transported to the gothic splendour of St Andrew’s Cathedral. Why go gothic? Just as with the caravan, the visuals of the show go against David.

Sometime later David unleashes his nuclear option, his twin Peter who used to be gay. Here we get a snippet of Michael and Greg discussing this, concluding that it is another version of playing the “My friends are gay card.” The power of Peter Ould’s testimony is lost.

This is in part because Peter appears on scratchy Skype.

By contrast, Michael and Greg’s nuclear option, getting married and inviting David as a guest, is revealed as their time to host David occurs and is filmed by taking the cast and crew to New Zealand.

Here, the framing of the show favours the pair getting married. Fabulous scenery. A great setting. Enthusiastic friends and supporters. Beats scratchy Skype any day.

A conversation between Greg and Michael about the wedding is revealing. Greg declares “It will be the highlight of my life”.

Michael responds, “The highlight of your life? You’re kidding.”

Who gets to participate in the show is interesting. David’s congregation in Macquarie Fields is amorphous. People at the wedding comment to camera. David’s family is hardly seen.

Reality television is a constructed reality. It seems to this reviewer that the show helped one side more than the other.

David would have known or suspected this when he agreed to take part. He wanted to give a human face to those who oppose gay marriage, and in that he certainly succeeded. Some Christians may be outraged that he may not have got a completely fair hearing. But David said on Facebook during the show last night, “The #lwte edit is necessarily severe but not unfair.”

The intensive media schedule that David had in the lead up to last night’s episode ended up being better for allowing David to articulate why he went on the show, and get his message across. For example, on 2GB yesterday, David was asked, “What would you do if your daughter came to you and said, Dad, I’m gay. Would you you say to your child?”

He answered: “First thing you’d have to say is ‘I love you. That just does not change. I absolutely love and adore you.’ And I cannot believe parents that won’t say that to their children. But you know, then you go, ‘thank for telling me a very, very hard thing. Do you want to talk about? Because you know where I stand on this, sweetheart, but you also know how much I love you.’ And that’s a really important thing, because in our culture we seem to think you can’t love people and disagree with them profoundly, but actually we need to find a better way of having our conversations. And again, I’m a Christian, so my model is Jesus. He disagrees profoundly with some people, right? And he walks around being quite clear on a lot of morals, and you know what the interesting thing is? It’s the people who think he can’t do anything for him who hate being told that they’re wrong–they hate him, but the people that go, do you know what, you may have a point, they flock to him.”

Christians have to try harder to get heard than people with more fashionable opinions. That’s the reality.

* Read about David’s ministry in southwest Sydney, from our 2013 profile here.

The Museum of the Bible in Washington DC will repatriate 11,500 antiquities to the Iraqi…

After years working ‘behind the scenes’ to ensure social justice campaigns succeed, Tim Middlemiss will…

Navigating the digital world as a family

Navigating the digital world as a family

Counting the costs of screen time