Inside the head of a devil: coming to terms with being Screwtape

When a group of Christian actors got together for a monthly Bible study earlier this year, they decided they wanted to produce something within their craft that “carried some weight”. That “something” ended up as the first Australian production of C.S. Lewis’ The Screwtape Letters, which ran for a week in September in Sydney to sold-out audiences (and there are plans to bring it back in 2016 and to more Aussie locations, too). Yannick Lawry played Screwtape, Lewis’ fictional name for the devil. In the book, Screwtape is a senior tempter and undersecretary of his department (envisaged as a kind of infernal civil service). Here, Yannick tells Eternity what it was like to try and get inside the mind of Screwtape, and what he learned about his own faith along the way. 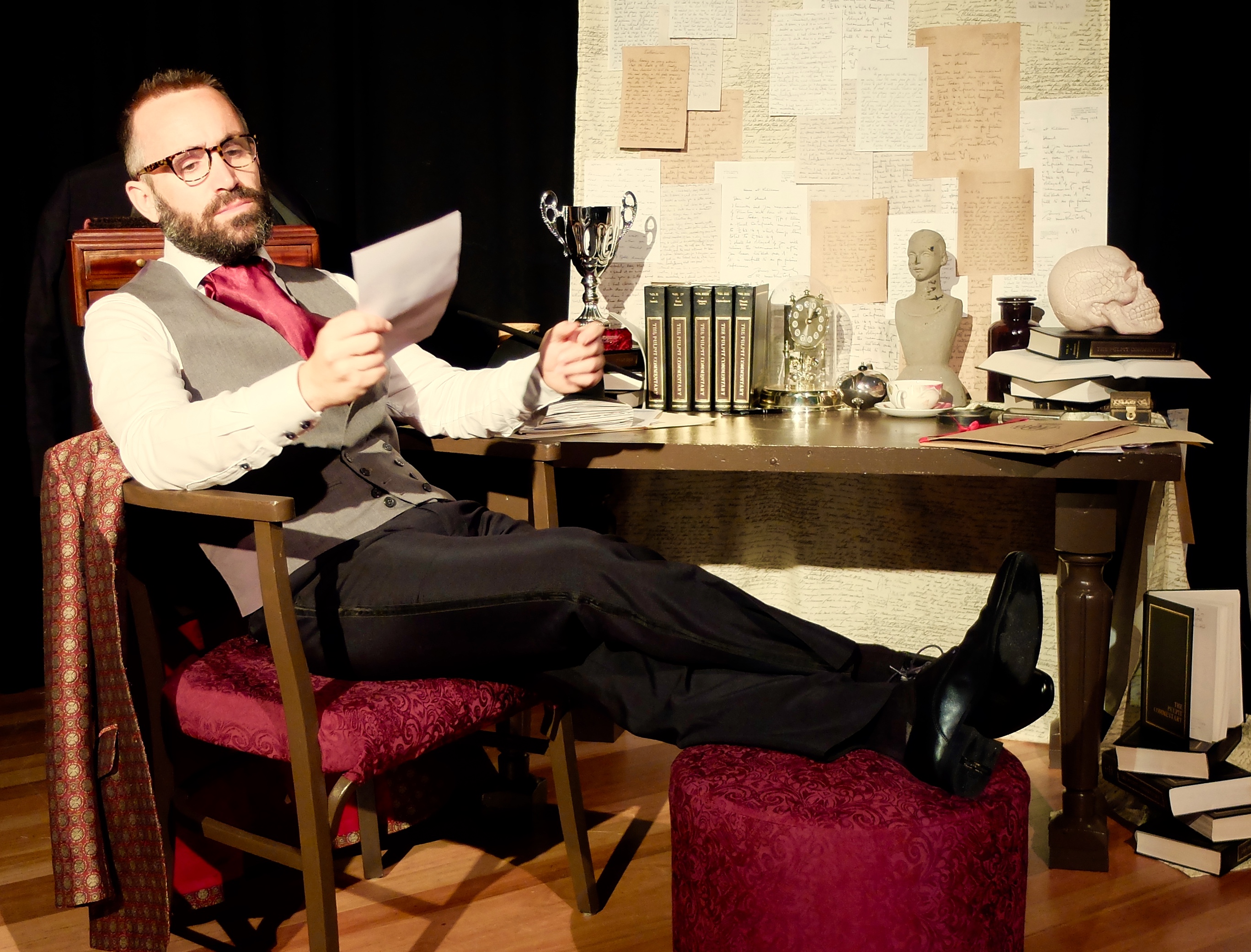 Yannick Lawry as Screwtape in an adaptation of C.S. Lewis’ ‘The Screwtape Letters’

“The greatest trick the Devil ever pulled was convincing the world he didn’t exist,” exclaims Verbal Kint in the 1995 film The Usual Suspects. It’s an insightful line as our modern culture tends to think of the Devil and demons as comedic characters or else as such superlatively sinister stereotypes that they don’t warrant serious consideration. The Screwtape Letters is among C.S. Lewis’ best-known works ­– a series of letters from senior demon Screwtape to his nephew Wormwood.

Despite the seriousness of the content – my character’s sole aim is to steer people away from God – the show still had to be entertaining.

Wormwood is based on earth and has the job of a ‘tempter’. Tempters are supposed to “wrong-foot” would-be Christians using subtle techniques to – as Screwtape says in one letter – “unravel their souls from heaven and build up a firm attachment to the earth.” In the play adaptation, the audience follows the journey of Screwtape and Wormwood’s “patient,” the subject of their letters back and forth but whom the audience never sees. The Patient is frequently attacked by the demonic duo; but despite their best attempts at subversion, God (or “the Enemy” in this world of reverse theology) prevails.

In Hailey McQueen’s adaptation of The Screwtape Letters, Screwtape is depicted as a Hell heavyweight who has a scribe, Toadpipe, to jot down his communication with his tempter nephew, Wormwood. The play has just two actors: me (Screwtape) and George Zhao (Toadpipe). 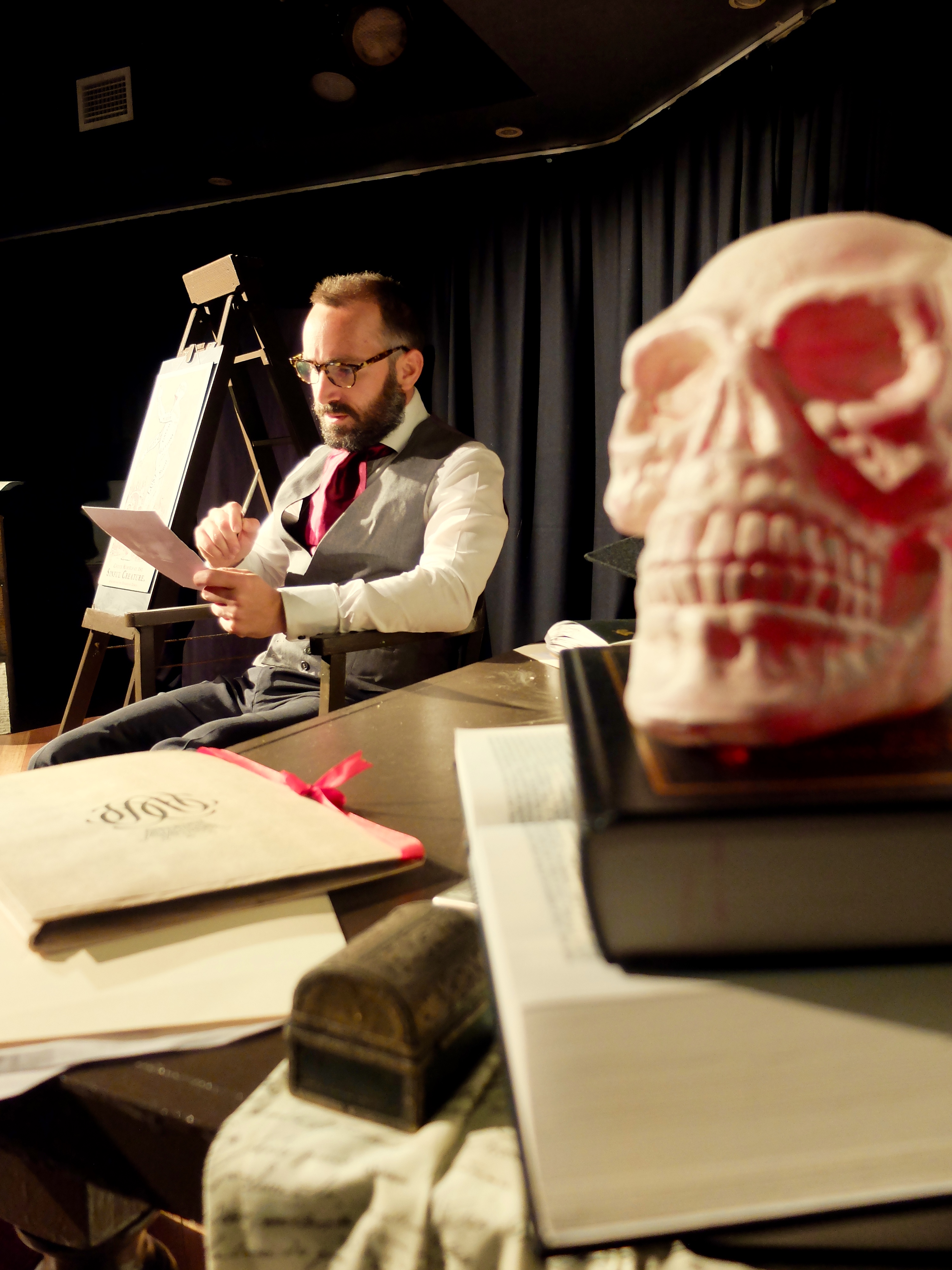 As a Christian actor looking to bring Screwtape to life, I had 1 Peter 5:8 in my head: “Your enemy the devil prowls around like a roaring lion looking for someone to devour.” Despite the seriousness of the content – my character’s sole aim is to steer people away from God – the show still had to be entertaining.

The play is structured as a cycle of letters to and fro, from Screwtape to Wormwood. The audience hears only the letters Screwtape writes, which are delivered as monologues from my character. Dense theological concepts in the script (an adaptation by Hailey McQueen which was wholly faithful to Lewis’s original words) needed clear and careful delivery. My job as an actor was to make sure Screwtape’s character didn’t get in the way of the message he (unwittingly) speaks about God’s love, goodness and salvation. But I had to do it without his character straying into that comedic or stereotypical space. In short, the challenge was on!

I’ve worked as a professional actor for over 10 years now, yet this is the first production I’ve ever worked on with a specifically Christian message, and a committed Christian creative team. In the seven-week rehearsal schedule, it was a joy to offer our rehearsal time to God in prayer, asking for his wisdom as we created this world, interpreted Lewis’s text and shaped the show for our audience.

At the start of the rehearsal process, it was difficult to know where to pitch Screwtape. Too aloof and superior, and the truth of the tangible nature of the spiritual battle we all face as humans was lost. Too camp, comedic or frenetic then audiences would look down on Screwtape and consider themselves superior to the very real threat of spiritual attack. 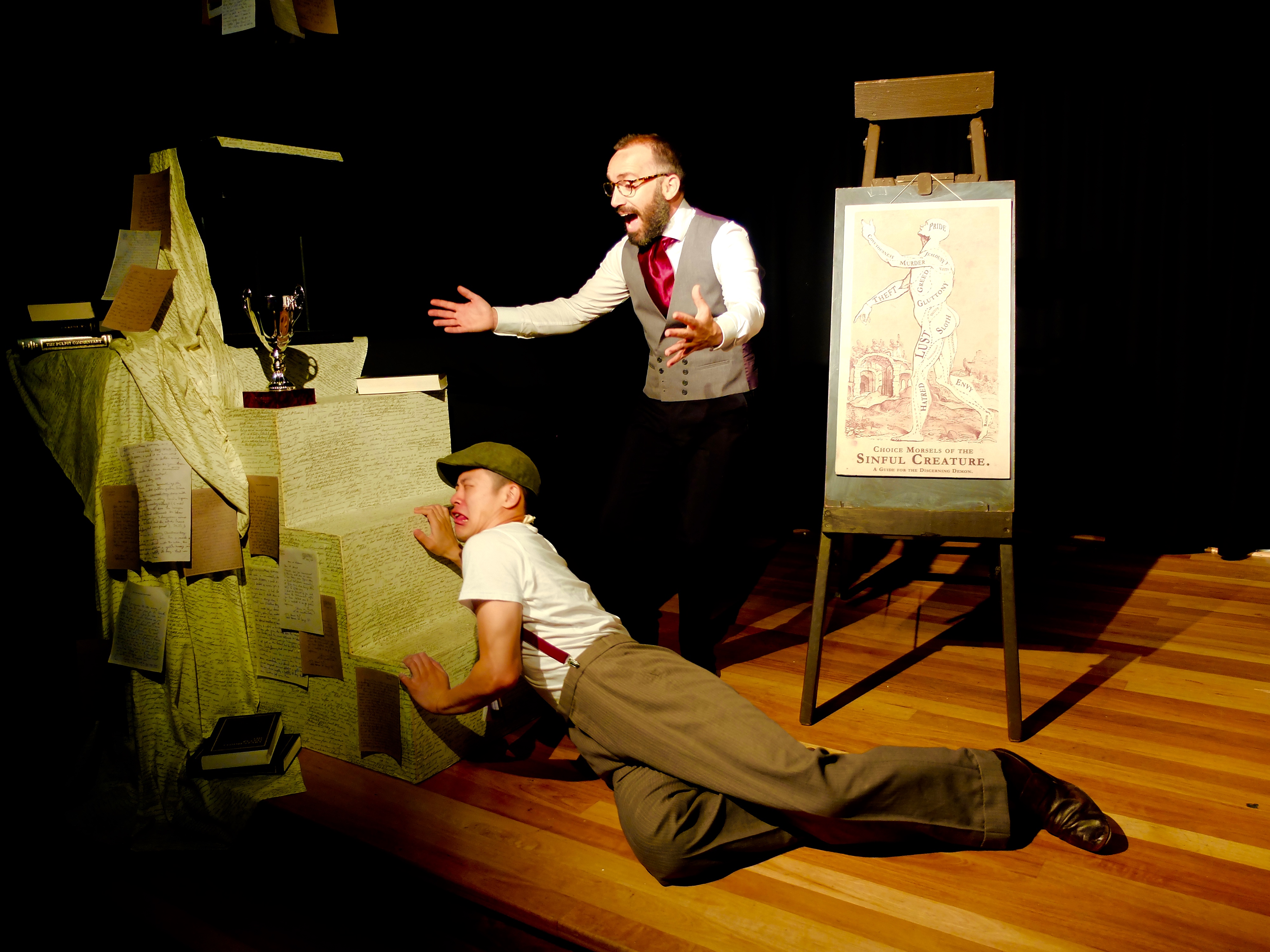 Yannick Lawry and George Zhao (on the ground) on the stage of ‘The Screwtape Letters’.

Over time, he became a charming, engaging and intelligent orator with a highly dangerous and unpredictable vicious streak. As Screwtape says about his aim with his human patients; ”We want cattle who can finally become food. The Enemy wants servants who can finally become sons.” Screwtape – like sin itself – had to seem superficially attractive, but at his core he is only about destruction.

Both my fellow actor George Zhao (Toadpipe) and I often had moments where passages from the text suddenly hit us, as if the Spirit had finally unlocked something we had been skirting around for weeks. One key line in the script had a significant impact on both of us during our first-ever performance.

How easy, and foolish, it is to reduce God to be contained within the constraints of our limited understanding!

In one of the letters Screwtape writes, he talks about prayer and its importance in the Christian life. He suggests that “patients” can be drawn in to praying for – or even to – things that take our attention away from God. Screwtape rounds off this letter by saying, “If a human ever consciously directs his prayers ‘not to what I think thou art but to what thou knowest thyself to be’, our situation, is for that moment, desperate.”

When we got off-stage, George and I compared notes and realised a penny had dropped. How easy, and foolish, it is to reduce God to be contained within the constraints of our limited understanding!

At the end of the show, Screwtape is addressing a hall of graduating tempters. On our f
inal performance, a line I was delivering hit me hard. “After we have played them for seventy years, The Enemy [God] may snatch them from your hands in the seventy-first. They are capable – you see – of real repentance.” 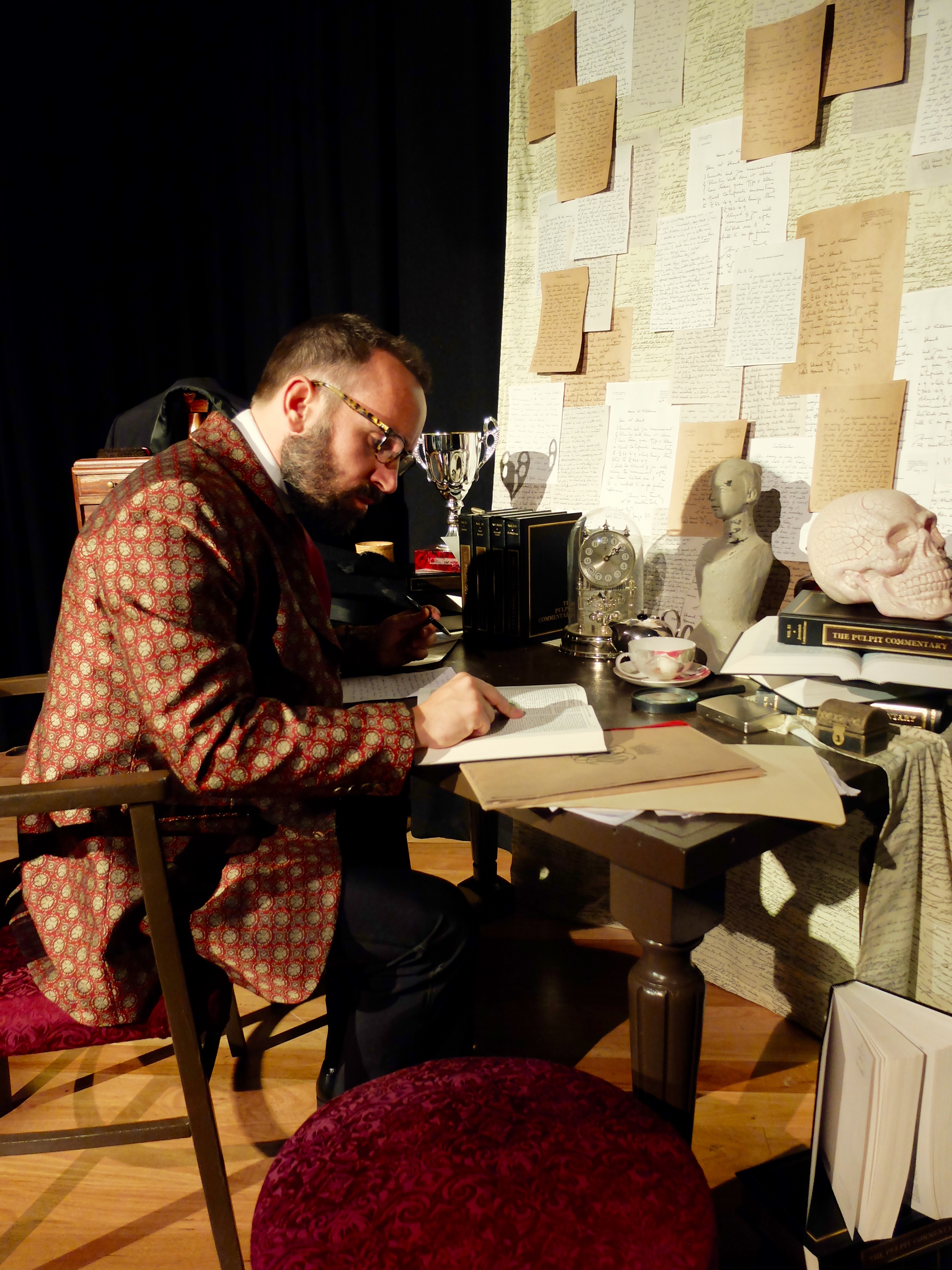 Stood half-way up a ladder on stage, in character and trying to round-off a play which had been running for 75 minutes I realised that this – in essence – was the key message of the show. Everyone in the audience and even beyond; families and friends who don’t know or yet accept the good news of the gospel can be brought to repentance and faith in Jesus! I realised I have Lewis’s words of wisdom in my head and a wonderful opportunity and blessing to deliver them to audiences, to try and get across that one core theme.

C.S. Lewis’ words have the power to unite the Christian community around core, distilled messages we all believe in.

During the course of The Screwtape Letter’s first Australian season, I was struck by three things. First was God’s goodness to us – a creative team who had never taken on the responsibility of mounting a stage show at such an established venue. We sold out very quickly, and not having to worry about whether we were over-committing ourselves in terms of finances was a huge blessing that allowed us to concentrate on the text itself and to build a show that would be wholly honouring to God.

Secondly, the Christian church across Sydney is wonderfully diverse and C.S. Lewis’ words have the power to unite the Christian community around core, distilled messages we all believe in. After the show, George and I would change out of our costumes and go out to meet and thank members of the audience. We had the great privilege to meet leaders and congregations from Greek Orthodox churches, Catholic churches and various other denominations who hold CS Lewis’s book in high regard and wanted to see the theological truths it contains brought to life on the stage.

Lastly, there was a good proportion of audience members who hold an entirely different world view and yet came to listen and watch. Hearing from friends that this has been an opportunity to start conversations about life, faith and the gospel is a great encouragement. To know there is an appetite in the arts for Christian work in a secular society is exciting for anyone keen to use their God-given gifts for His Kingdom.

Here’s the secret to revival

Here’s the secret to revival

Graham Hill says it’s not what you are thinking