There are some Christian books that are wide-ranging, trying to cover a variety of uses and users, linking ideas over a spectrum of theological thinking and bringing them to bear in a pastoral and practical way onto what it is to live as a Christian in the world today.

And there are some, like Praying the Bible, that have a single idea, a single purpose.

To call this a one-idea book is not an attack: it’s short and sharp as an ice-pick. I read it in about an hour. And I highly recommend it because, if you’re anything like me, you don’t know enough about the spiritual disciplines.

Spiritual disciplines occupy a bit of an odd place in our current Christian context, I think. Perhaps we suspect that teaching people “what to do” smells too much of the trappings of works-based salvation, as if saying this discipline might be good for you may be impinging on salvation by grace. 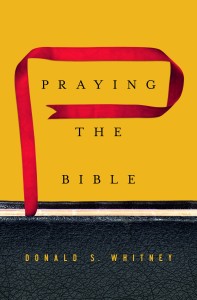 In this, we are out of step with the vast majority of historical Christianity, and that is one of the reasons for Donald Whitney writing this book. Whitney is a professor of biblical spirituality at a seminary in Kentucky, and his writing here is clear and on point.

He begins with the problem: “Since prayer is talking with God, why don’t people pray more? Why don’t the people of God enjoy prayer more?” Often, he argues, we “tend to say the same old things about the same old things” –prayer becomes rote, and a bit lifeless.

This is not a matter of being a second-rate Christian (or, for that matter, intellect or education), but of method: his answer is in praying the Bible, as the title suggests. Beginning with the book of Psalms, and using the Psalms as a jumping-off point with which to converse with God. This method he admits is, on the one hand, not revolutionary in its newness, but on the other hand, has been a spiritual revolution for some precisely because it is simple and effective.

As a whole, the book is easy to read, not just because of its length, but Whitney is a writer with real empathy for his audience, and a sly sense of playfulness about his own teaching. It’s refreshing to have a Christian writer who doesn’t take himself too seriously.

But more importantly, what he writes is practical, and easily practice-able – there’s one moment in the book that he undercuts himself by urging you to put down the book and actually do what he’s instructed you to do.

Along the way, he addresses potential objections, practical considerations, and the theological whys and wherefores of what he is teaching. But ultimately all of this is directed towards the simple, noble purpose of having his readers praying to the God who speaks with the assistance of the Word that he has spoken.

“Many who are reading this book have endured the guilt of an incurably wandering mind and feelings of boredom in prayer for decades, and here comes a writer asking you to believe that here is a simple, permanent, biblical solution to a problem that’s plagued you for most of your life. Would I really ask you to believe that?”

If you think that could be true – and it is – then I recommend this book as a way in to bringing some clarity into your prayer life.