Ever since they spent their honeymoon on Lord Howe Island, Roy and Karen Davidson have loved the pristine beauty of the sub-tropical island, 600km off the east coast of NSW.

Now Roy, who is senior minister at St Lucia Bible Church in Brisbane, returns regularly with his family for working holidays as locum minister at Christ Church, the island’s Anglican church.

“It’s quiet, it’s beautiful, pristine and it’s got a lovely outlook on the world,” says Roy, explaining why he has given up his annual holidays to hold the fort over Christmas and January, conducting two services on Sunday, school scripture and a weekly Bible Study.

“It’s a nice arrangement to come over here and do a couple of days’ ministry and then have the rest of time to yourself – you bump into people and you know them; it has a small country town feel.” 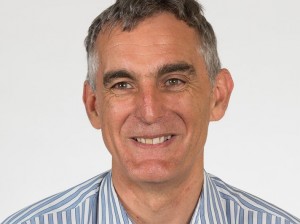 Roy, one of about 20 active and retired ministers who volunteer their time for stints of four to six weeks, loves going fishing and says he catches something “50 per cent of the time”. His nine-year-old daughter Jessica had been counting down the days to landing on the island. She was looking forward to getting on a big bike and dressing up Bruce, the kelpie/labrador dog belonging to the island’s only doctor, Dr Frank Reed.

Youthworks CEO Zac Veron is the Sydney-based minister responsible for coordinating the volunteers to look after the island’s Anglican church. He spent six Christmases straight on the island and “built some consistency in terms of vibrant and exciting church services.”

He also witnessed some church growth, adding a second service at 5pm about ten years ago, which immediately drew residents working in the tourist industry who hadn’t been able to make the 9.30am service.

With regular summer attendances of up to 35 in the morning and up to 20 in the afternoon, Zac predicts at least 100 people will crowd into the 1950s church building for Carols and Lessons at 9.30am on Christmas Day.

There will be a children’s talk and a choir, led by Inga Brasche, a lecturer at the University of New England who is spending three years on the island. 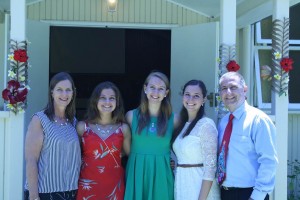 From left: Sheree, Desiree, Anne, Larissa and Zac Veron after a Christmas Day service on Lord Howe Island at which they made musical presentations.

“When you get 100 people in that building, it’s standing room only because it’s not a huge building and they were special times of celebration that still live in my memory,” Zac says.

Zac says the special thing about Lord Howe Island is that people, tourists and residents alike, are open to talk about spiritual matters, to come to church and to share their lives.

“There’s something about the island – you’re relaxed and you are encouraged to engage with people as people much more so than in the busyness of a big city,” he says.

Dr Frank Reed, who has lived on the island for close to 20 years, is a keen member of the Anglican congregation, and also regularly attends Saturday services at the Adventist Church on the island “to show solidarity with our Adventist Brethren”.

“They set up a nice full-size nativity hut they make each year out of split logs.”

On the odd occasion when there is no visiting minister at Christ Church he either leads the services or preaches the sermon.

After the Christmas Day services in the Anglican and Catholic churches (the Adventists hold their service on the Saturday before), most people on the island will have a picnic.

“People generally picnic on Christmas Day. The Adventists get together and have a picnic on Ned’s Beach in the grassy area. The whole church attend as part of their celebrations and a whole lot of others join them because they really do it well.

“The Catholics have a reasonably well-attended service. Sometimes there’s a priest here; sometimes the local congregation members run it.”

He says most people on Lord Howe don’t need to buy an artificial Christmas trees because there are a lot of saplings of Norfolk Pines on the island, which are considered a pest.

The pre-Christmas events include a present-giving public event where Santa arrives in a fire truck or in a Marine Park boat or some other novel way, and gives out presents to all the kids which the parents supply.

“There’s also an outdoors carols service in the late afternoon. They set up a nice full-size nativity hut they make each year out of split logs. We get 200 to 300 people, which is a lot considering we have a local population of about 360-380 and about 400-500 tourists on the island.”

Frank says Christ Church’s claim to fame is that, despite its small congregation, it is in the top ten churches in the Sydney Diocese for per capita attendance.

“The exciting part of our Christmas here is that a lot of children and relatives of islanders come to the island for Christmas, as well as all the tourists. Everybody is fairly excited because people who were born and bred here come back, so everybody kind of reconnects in a very lovely way. There are lots of beachy get-togethers.

“The lodges try and make Christmas very special for their guests. The restaurants usually put on some very expensive super-duper dinners on Christmas Eve and Christmas Day for those who are here on holidays. And it’s a good vibe.”